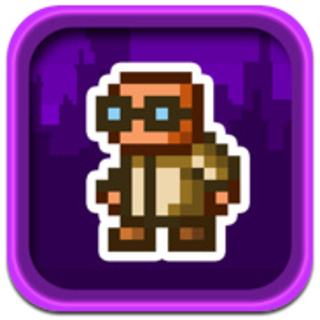 Lots of fun and hours of gameplay.

User Rating: 10 | League of Evil IOS
By superhero12345 | Review Date: August 4, 2011
I love this game. I have played some of League of Evil online, and as soon as I found out it was an iOS game, I purchased it immediately to try again what I could not get passed and was too hard that it seemed almost impossible. I still haven't gotten to that part yet, but I couldn't resist writing an immediate review. It is so fun that I just can't describe it. It is platforming at your best. Well, okay, maybe not your best...but close. You control a character who runs around different rooms filled with spinning obstacles and occasional enemies that you have to work your way around and maneuver past. It is not as easy as it sounds. It is at first, but gets harder as you progress. At the end of the level, you must destroy the scientist standing there like a statue. Each level also has a briefcase for you to collect that unlocks challenges and achievements, adding to the difficulty, but they are optional. League of Evil certainly isn't the best platformer I have ever played, and there isn't much to discover and explore in each level and world. The obstacles and enemies remain the same and do not change to any other different enemies or obstacles, but the position and movement of them and the walls are changed, of course. Obviously it's to do that, and so there's nothing to complain about because the game itself is fun and challenging for what it has to offer. The background colors change, so it makes the game more cool and interesting. It's 2D, and pretty basic and standard. Nothing like Super Mario or anything, and certainly nothing like Diversion, Lars, or Super World Adventures for iOS. It's very similar to Meganoid, another awesome game. I just can't describe it. It's nothing extraordinary. It's your casual run and jump. But for 2 bucks, it's all you could ever want or ask for in an iOS game and in a platformer. That does not take away its worth of getting a perfect 10 score. For what it is, it is awesome and will keep you entertained for hours. Now, when I say it is nothing like Super Mario, I mean I mean not as fun as it. However, it is very similar to Super Mario, and that still makes it an extremely fun, entertaining, challenging, and addictive iOS game. The only difference that sets it apart from not being as good as Super Mario is that it has fewer enemies and fewer obstacles. But that is not saying anything and does not mean anything at all because this is its own game. And let me tell you, it's simply smashing. It's just so awesome and is definitely for the hardcore crowd. Once you beat the first fifty levels, the difficulty ramps up faster than you can say wow. It then becomes a game that puts your skill and patience to the ultimate test, and it then becomes so intense and full of suspense. It's basically to see how far you can go from there. It's not the hardest platformer I've ever played, but it's difficulty is quite perfect for a 2D side scrolling action-adventure title like this, as it seriously pushes the limits. It truly is a precious gem for your iPod Touch, iPhone, or iPad, like most iOS games I have on my iPod. If you love platformers and/or loved Meganoid, go buy it right now. You won't regret it.
Load Comments (0)