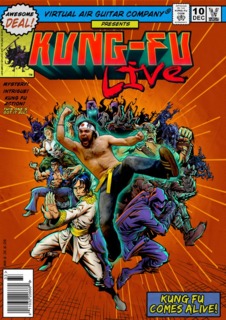 User Rating: 10 | Kung-Fu Live PS3
By vishinatorgame | Review Date: February 14, 2011
Kung-Fu Live is built on reasonably good ideas. This comic-inspired, downloadable game uses the PlayStation Eye to scan an image of the player into the game world so that players can interact with (see: beat up) opponents on screen with their own punches and kicks. In this way, players are experiencing something very similar to a Kinect-powered game -- just with different technology. But Kung-Fu Live, despite its intriguing premise, is a technical disaster. The image scanning is far from perfect and requires very specific playing conditions that many gamers will not have access to. Furthermore, player input is often misinterpreted or completely ignored. I wanted to enjoy Kung-Fu Live, but my time with the game ended in incredible frustration and a whole lot of sweat.
The story you'll find here is a silly one; you fill the shoes of an average city-goer that finds work in a Chinese comic shop. Within minutes, you're sucked into the world of a kung fu comic, spit back out, and then you unleash an ancient, dark plague onto the unassuming masses. It's up to you to fight your way through the dark hordes and defeat an evil sorcerer. All in a day's work!
Load Comments (0)