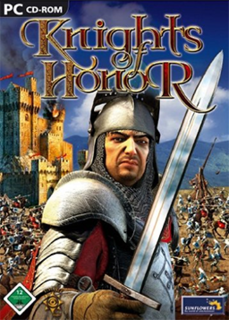 You have to appreciate Paradox Interactive for bringing this indepth strategy game to the U.S. for gamers to enjoy.

User Rating: 8.4 | Knights of Honor PC
By SadExchange | Review Date: December 23, 2005
Releasing itself from a new small developer named Black Sea Studios on June 6th of 2005, Knights of Honor gave strategy fans a truly in-depth strategy game experience that not only had nostalgic 2D graphics from days past, but also gave players a unique experience setting them into the role of their own royal court during the medieval times of Europe. Releasing itself a year earlier in Europe, fans from the Western Hemisphere had to wait for a publisher to distribute the game in our neck of the woods. But, with the wait, came an already pre-patched game that upon release in North America, didn’t have any real graphically or gameplay glitches to point a finger at. If you can remember from my top ten games of 2004 from last year, you’ll remember that Knights of Honor was mentioned as a surprise title of year, which probably did end up surprising a lot of people by their first glance of the game, but after playing it for a few hundred years, in game of course, you’ll soon realize just how in-depth this game can get.

After soon starting out Knights of Honor and running through the tutorial, you’ll begin to realize just how in-depth this game is. You’ll soon see how much time the developers took in locating and looking up information about the different time periods you’re given to play in. From the beautiful map of Europe and its surroundings to the differences in the different nations of their respective time periods, everything and every idea in Knights of Honor was thought about a few times over. There are different time periods/eras to start out in including: Early Medieval which is about 1000 A.D., there’s High Medieval which is about 1200 A.D., and there’s Late Medieval which about 1350 A.D. These may seem simple in the beginning to the new player, but there are many differences in choices soon after that. The play is then given a choice of which nation/culture they would like to play as and this is where the historical value comes into play with Knights of Honor. During the respective time/starting periods, the different nations are located differently, but historically correct nonetheless. Not enough can be said about the time that was taken in completely figuring out Europe and all of its provinces during the different time periods. And based upon the different locations of Europe and its surroundings, the player will be able to mine and manufacture different items such as spices or luxuries, but only depending upon his or her location. Not every exotic good can be found in every province, you must either set up trade with another province or take them over in order to change your trade goods.

Upon progressing your kingdom either through conquest of diplomacy, you’ll be given kingdom advantages which are helpful skills that will enhance your nation that much more. Collect enough of these advantages in a single category and receive the bonus benefit of that particular skill. The game has a large and in-depth tech tree that if planned out right with dealing with your different cities in different provinces, can bring large riches to the player in the long run. One unique part of the game is dealing with your royal court. Consisting of nine different people, your royal court can be full of Knights, Clerics, Spies, Merchants, etc. to aid you on your way, but beware because installing these people into play will cost you and if your provinces are not bringing in enough revenue, you’ll soon feel the pinch of your coin. Raise the taxes of your provinces too much and your people will hate you for it. Whatever your choices are in your royal court, make wise decisions, because you can only have nine altogether. With having a royal court, you’ll also have a royal family which starts with a king, who most likely will eventually, but not always, get married and will have offspring which will in-turn rule the kingdom upon his death. If no heir is provided, upon the death of your kingdom, you’re given the choice of one of your knights to carry on the decision. This game’s depth may surprise you while playing. Choosing to marry off one of your daughters to the Germans to remain peaceful may seem like a good idea at first, but when they demand vassalage, will it still be a good idea? You’ll have to decide, but it’ll probably take you a few games through to make better educated decisions for your overall experience.

Upon first glance of any screenshot of this game, you’ll notice that the game is presented with 2D graphics and pre-rendered backgrounds. While this may be a turn-off to the graphic whores of gaming in the recent years, other will see the beauty in it. When looking on the whole map of Europe, you’ll realize just how detailed these maps are. You’ll notice the clouds floating by as your armies roam the land in conquest of advancing their kingdom. The game is played from an isometric view that can be zoomed in and out of to some extent, and you’ll only be able to see the land you own and that of your closest allies, while land of your enemies are fogged out slightly, enhancing the difficultly of the game. As you progress through the ages, you’ll see your cities and villages expand and with that, also the territory around you. The developers took great care in giving the player a realistic map of Europe during the medieval times which you’ll come to appreciate over time spent playing Knights of Honor. Over time of amassing your land and armies, you soon have to battle your enemies, whether you like it or not and these battles can be automatically played out without interaction from you, or you can handle them manually. If you choose to do it yourself, you’re presented with your troops on a battlefield which might be by a stream or forest or other environmental avenues, but along with the 2D graphics, these battles are nothing to marvel over graphically, but those looking for strategy should enjoy the idea of flanking your enemy and using different troops against your opponents at different times to engage your enemy

While the game has a decent soundtrack, you’ll soon notice that it loops because of how long a game can last in Knights of Honor. True enough, in the beginning, the game will seem take awhile when first expanding your provinces, but after a few turns, you’ll soon be given the chance to control many troops across the large expanse of Europe, and while all of this may keep your mind occupied, chances are you’ll be noticing the looping soundtrack a few times and there are also even times when the music cuts off for no reason, but this is rare and the music is pleasing enough for most fans of the era of the game where they won’t mind it too much.

Overall, if you’re a fan of strategy games and are looking for something with a little more depth instead of the old point-click-kill style, and you enjoy historical accuracy, then you’ll love this game. After a few hours, you’ll soon learn to appreciate the time that the developers spent of making a historically accurate game, while bringing the gamer an engaging game from turn to turn on a beautiful map of Europe. People of the Western Hemisphere have to be glad that a publisher picked this title up to be released over here. Definitely a wise choice. If you haven’t heard of this game yet, take a first look. If you’re iffy, give this game a chance and try the demo, but be sure to give yourself some time because with all the depth involved, it’s gonna take more than an hour to get yourself truly into this great game.
Load Comments (0)