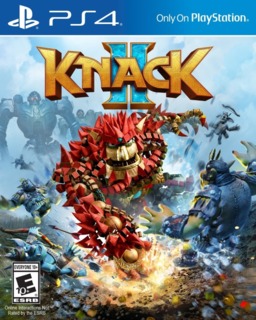 Knack 2 expands on the quality cutscenes and fun platforming of the original.

Knack was an enjoyable platformer but understandably it may have been rather underwhelming for a launch title. The beauty of Knack 2 is now that pressure of being a launch title is well in the past and this allows the game to instead make a direct appeal to those who were fans of the first game. I must say I'm quite impressed just how well Knack 2 manages to stay true to the original game while fleshing out the campaign out to a length comparable to most Triple A games. A fairly simple 3D platformer Knack 2 does suffer a little from some minor repetition but it manages to stay interesting from start to finish. Whether you got to play the first game or not the Disney-esque cutscenes and the adventurous platforming combine to offer players a delightful experience.

In the first game a young boy named Lucas befriends Knack, a creature born of relics, and they must team up to defeat some nasty goblins. As Knack 2 starts Lucas is showing his uncle some ancient goblin ruins when some of the old goblin's machines start to come back to life. Lucas and his uncle end up seeking help from a village of monks that know a lot about the past conflicts with goblins. It turns out in the great war between humans and goblins the human race was nearly crushed by the goblins superior technology. Had it not been for a legendary hero that stopped the goblins at their power source all would have been lost. It appears as if someone has found this power source and is now using it for their own means. You'll track down this new enemy as long as you can get everyone to cooperate which may end up being the real challenge.

Knack is a fixed-camera, third-person, platformer honestly not terribly different from the Crash Bandicoot games. You spend about equal time fighting enemies in combat, jumping between platforms, and solving very light puzzles. The combat feels quite good and is especially enjoyable once you've progressed enough to unlock some of Knacks best moves. Knack eventually can pull enemies in from a distance, freeze them for a couple seconds, or simply smash their armor and shields to pieces. Of course outside of combat you have other things to worry about such as falling to your death, dodging laser beams, and not getting smashed by machinery. Now and then you'll have to move some platforms around or sneak around like a ninja if you wish to progress through certain stages.

The story takes about twelve hours to complete which I feel is quite a reasonable length. That said there are plenty of reasons to replay stages if you are a completionist. First it is unlikely you'll find all the treasures the first time through the game which Knack needs to unlock combat upgrades. Of course playing the game on New Game plus will let you keep your upgrades while letting you try a more challenging difficulty setting. Each stage in the game has three bonus objectives which you may occasionally unlock by accident but are only visible from the stage selection screen. After completing the game you unlock a series of five time trails and three combat challenges which reward you stars based on your performance.

Knack 2 is just a plain fun platformer with an entertaining Pixar inspired story scenes. This game is quite a bit longer than the first and occasionally gets just a little repetitive. The gameplay roots can go back to Crash Bandicoot and the N64 era and seeing as those games get remastered it seems clear, at least to me, that what made those early 3D platformers enjoyable is still fun now. I had such a fun time hunting down all the treasure chests I even revisited some levels and tried completing a mission or two while I was at it. If you're like me and you miss the days of linear story-driven games you have to check out Knack 2 and it's predecessor.