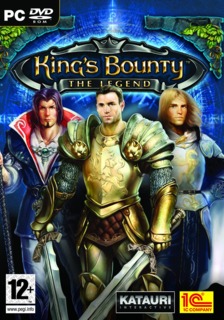 My girlfriend almost dumped me because of this game....

User Rating: 10 | King's Bounty: The Legend PC
By Nailex | Review Date: October 29, 2008
I'm not kidding. For the last 2 weeks I've spent over 100 hours playing King's Bounty (I work full day, have a girlfriend and even sleep sometimes ;) ). I spent every free minute playing this game. I had been sucked by it and I just couldn't get away.

1. Technical issues - Well as it is a russian game it had some glitches mostly due to errors during localization (I blame Atari for this). After the first patch almost all of them were fixed. The game have incredible music, exactly what I would call Heroic. Unlike some similar games the camera is very friendly and easy to use.

3. Story - The story is incredible. If you read every dialog in the game you will truly understand the world of Endoria. At times the story is made cliche on purpose while on other places you will do quests which it is doubtful a "Hero" should do :). I don't want to spoil anything to you so I'll just say - Play the game and learn.

4. Gameplay - At first look the game looks very similar to Heroes of Might and Magic series. You have a hero riding a horse, an army and you fight creatures on a battlefield similar to the one from HMM series. But the similarities ends here. There is a lot of various different things which makes the game significantly different (you have a maximum army you can use, different base stats, etc). The game is also not turn based but real-time. Also you don't have a castle but you hire your army from the castles of different rulers (the higher your reputation with the ruler the higher level creatures he offers) and dwellings on the map.

There is over 100 different creatures, more then 100 different artifacts (you can't see all of them in one game) 100 spells and countless combinations and tactics you can use to make your army and strategy.

In the start of the game you have to chose between 3 types of heroes - A Warrior, a Paladin and a Mage. This is maybe the biggest problem of the game. The 3 classes aren't balanced. You will barely be able to finish the game on Hard difficulty with Paladin or Warrior and on Impossible you can forget about doing this. On contrary the Mage have almost no difficulty beating the game on Hard and it is the only one standing a chance on Impossible. So if you are knew to this types of games chose Mage. Other bad thing is that you only have one map and after a second play of the game you probably want start it again for a third time. There is a few things which get randomized with each game but the quests are the same (there is 101 or 102 quests in the game) which will probably stops you from playing again. The good thing is that there is a very good Russian modding community which will probably make something else from the game in no time. The bad is that i doubt many of the mods will be translated at English.

5. Multiplayer - Sadly there isn't one.

King's bounty isn't the perfect game. It has its own bugs and unbalances. But in a age where most games offers your a miserable 5-6 hours of gameplay (cough, Warhead, cough) for a price of over 50$ a game which offers you more the 60 hours of pure fun for half that price is something really worthy. Because King's Bounty is a game which isn't done for money. It is a game made for us gamers - a game made with love for the gaming not made to fill some corporate bastard pocket with money. So i strongly recommend you to buy this game. Because the future of the video games lies in games like that.
Load Comments (0)