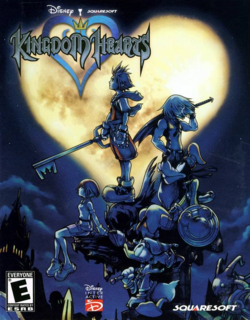 Kingdom Hearts 1 was my every first game as a kid in 2002. Gunna say I love it. Played every game and this is the one that started it all. If you wanna pick up a copy though; I would recommend the PS4 Version. Cheap, and get more games with the bundle. Anyway I'll be talking about the PS2 US Version that came out in 2002. Speedrunner.

-The mix of Final Fantasy, Disney, and OCs was a great idea. It's funny to me seeing a bad ass like cloud getting a beat down by a talking dog and duck. But really I though it was a nice mix. Wish in KH3 they kept it that way. Yes I know DLC they brought FF characters back, but it's not the same.

-When playing as Sora in the first game you kinda get to play in his big yellow shoes. What I mean is both the player and Sora doesn't know what the heck is going on. Sora went to a new world and is new to all this keyblade, light, and darkness stuff.

-The Story in the first game was pretty great. Disney worlds get put into the story a bit more in this game then some others. I won't go over to much for those who hasn't played. But the game makes Sora feel special which makes you feel special. I guess that's the best way I could put it without spoilers.

-Gameplay is good. I won't say the best do a lot of normal hits in a lot of fights unlike KH2 or KH3. But magic and summons still have good uses. Like in Deep Jungle you and jump and use Blizzard to take care of groups of heartless with ez. No floaty combat either. I know some people don't care about that, but I'm not one of them. I like my ground resets as fast as possible.

-Lots of Easter eggs. Out of all the KH games. Gotta say I miss the Easter eggs. KH1 had so many things you could miss on your first play through. HECK! Even your 1200th play through Bloodybiz a speedrunner didn't know you could freeze the platform in Hallow Bastion and he has speed ran the game. Noting he speed runs the 2nd game the most, but still lol. Even I missed so much I learned something new about the clock tower just a week ago in 2020 18 years of playing... like amazing.

-Music is just... amazing. Like the beat game that is coming out I'm hyped. I also play osu so fan of beat games, and I'm hyped for the KH beat game. This games music is realllly good. You won't be annoyed by it I can tell you that. Less you played Unchained key... Then the world map music might get annoying at times. But really... Unchained key isn't that good anyway so... just watch the story and yeah.. You're good.

-Extra bosses after the game. I loved fighting Sephiroth after beating the game. Fun extra content.

-The Camera in this game is controlled using the L1 and R1 buttons. Can be very awkward. Not a fan. I like the Right stick camera better.

-You can miss a Trinity Marker on Oogie. They fixed it for the other games, but on this one be carefully you can't finish Jimmy's Journal if you miss it.

-Chests can't be opened in combat. I liked being able to pick up chests in the other games along the way without having to kill everything in the room. So it sucks in this game that you can't do that you either have to try and not spawn the enemy's or be a mass murder of these creatures of the dark.

-Donald and Goofy are needed for Trinitys and can't be switched less you are at a saving point. I hated when I was a kid that didn't know where everything was and had to go back to save to switch party members just for the marker. Wish they put in a way to switch party like in KH2 make things cleaner.

-Maps can be hard to navigate. I don't have problems with it now because I've been playing the game since I was 2 years old. But as a kid; getting around as so annoying. Honestly I don't think it is that big of a deal other then Monstro. But my friends didn't like that. They just wanted to get to the next section and the maps can be confusing. Monstro was reallly annoying due to every room looking the same and it being a maze really. As a kid I broke my controller over being stuck there lol.

-Some mob fight's are really annoying in the game I find. Mostly in end game. Really shouldn't be super hard for older players, but for newer player's that don't use gravity or Stop will be parrying everywhere and having trouble at end game mob fights.

-Hook Ship RNG. Mostly hate this for the speed run I mean because it is an interesting mechanic. When going to a certain world you have a chance at hook ship being I believe at around a 1/3 chance. Now Probably not a con for new players or older players playing just for fun, but for speed runners and me it's annoying. So more of a personal thing.

May have missed some, but I digress. I love this game I think it is a worthy game to add to your shelf. Once again probably buy the PS4 version rather then the PS2 at this point in time. I may have cons, but every game has downsides. This is my favorite game series so I still love it to death. Hope you guys give it a go.