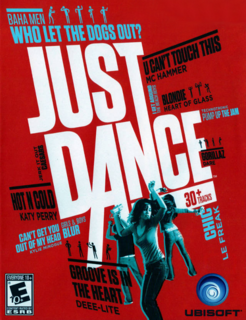 What might seems to be boring for the true gamer, can actually be fun for other audiences

User Rating: 6 | Just Dance WII
By y_monty | Review Date: March 11, 2010
Just Dance - Let me just start by saying that this game doesn't offer what you can call "A Nice Big Experience" for the hardcore gamer. The game is pretty simple ... No customization, no characters, not too many songs, etc. Like I said before not much to look at, but what might seems to be boring for the true gamer, can actually be fun for other audiences. Let me explain, this game is not intended to be played alone "just for the fun of it". It is to be played with someone so that you could make fun of each other and exercise yourself a little while you at it.

Anyway if you're a casual gamer and like to play simple stuff that doesn't require a more complicated set of direction and buttons inputs, you could enjoy dancing a little.

As for the songs there aren't too many, but you're going to recognize most of them, because they're very popular. Also good variety for the different taste of music. The game brings you a total of 32 songs that you can play in a short version or the complete song.

The dancing part shouldn't be a problem, you only going to need the wiimote and pick the song you want taking in consideration the level of difficulty.
Load Comments (0)