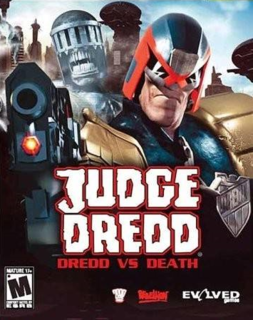 User Rating: 8.9 | Judge Dredd: Dredd VS Death PC
By csm101 | Review Date: April 5, 2005
Well, with all the bad reviews, I was extremely hesitant to buy the game, but at its budget price I did anyway, and I sure am glad I did! Obviously the Gamespot reviewer did not get very far into the game, or was not a Judge Dredd fan to begin with, to have such low scores. What's probably turning a lot of people off is that they think the game is based on the Sylvester Stallone movie. The game is based on the Judge Dredd comic strips in the magazine 2000AD. Most Americans will be unfamiliar with the mag due to it's being relatively unknown outside England. But if you have read them, you'll find that the game is very true to the comics. The plot could be straight from the pages of 2000AD, and is pretty good. Gameplay is pretty straightforward, with the standard WASDF keys for movement and interacting with the environment. Actually, it is very similar to the Republic Commando layout, even though it predates that game by quite a while. The graphics, while perhaps not up to Half-Life 2 standards, are very good. Game characters are a bit cartoony, but that's perfectly in keeping with the game's comic book origins. In fact, it's almost as if you're in one of the Judge Dredd comics. Sound also is very good, with an option for surround sound (although 5.1 would've been better). The single-player campaign is of decent length, and if you do well in the levels, additional content will be unlocked, which consists of a series of mini-games called "Arcade". Think of them as individual missions to complement the campaign. Multiplayer is through Gamespy only, but sadly the publisher has withdrawn support for multiplayer for some reason. A shame, because the game includes co-op play for 2 people to play the campaign. Still though, at $15 it's a super bargain. If you like Judge Dredd at all, you'll love this game. And even if you never heard of him, it's still worth playing...
Load Comments (0)