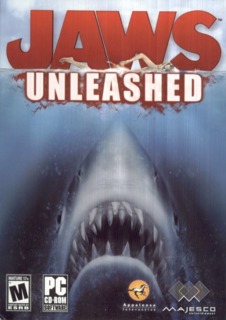 3.8
Bad Check out the review

This game might have alot of flaws, but Being the shark makes it Great!

User Rating: 8.9 | Jaws Unleashed PS2
By RSCNAVYSPAZ | Review Date: December 13, 2006
Admittedly this game is kinda weird, You can do flips over boats, throw people very far, jump onto land, and do alot of impossible things that a shark would never do. But this game may not be realistic at all. but trust me it is VERY fun. A Game you could possibley stay up playing. The begining is somewhat boring, you start off in a creek underwater, And you attack a divers cage, then you go attack a pier, and part of the story is you get captured, and taken to seaworld. You break out of seaworld. And into the Ocean. Then you can roam around free, somewhat like grand theft auto. Certain areas of the ocean have different fish and Sharks. And some areas even have Whales. Like Blue whale, Killer Whale, Sperm Whale, and Whale Shark. You can even run into massive schools of jellyfish. But if you stay in them too long you will die. But it takes awhile of swimming threw them. The story is really stupid tho honestly. The charachters mouths dont move and have graphics worse then vice city. Only the shark and the coral underwater look real. The thing that makes this game so fun. Is roaming around, Finding things to attack. Such as going up to the beach, and attacking a swimmer. Then pulling him/her down to the deep and shaking he around and eating her. But if you stay at the beach attacking too long, the police will show up. And even chase you for awhile in Boats. Which gets annoying cos they follow you pretty much anywhere. Gameplay: Is great, Even if its not realistic. Its very fun to swim around, and attack things. You can also run into somewhat of miniguns, such as "Protect the Whale carcass for an entire minute from other sharks!" which get harder as you beat them. And Attacking and sinking boats, is fun, but takes awhile of biting. And is very hard to do to fishing boats since they have guns and spears, but extremelly easy for sailboats.

Graphics: The graphics are decent, esspecially for the PS2. The shark and the Coral and underwater life look pretty real. But the people and other stuff look really stupid. Sound: The only sound I like is when you attack someone and they scream, It sounds cool. Esspecially when you pull them underwater. Then underwater screams are really neat. And when you keep them underwater and shake them around. Its funny. But the rest I think is stupid. Sharks growl in this game. Which is not realistic. The people constantly repeat what they say, its always "We're never going to make it!" but they say other things to. not much of a variety tho.

Value: A game you should deffinetly, Atleast rent. This is a very fun game, although it gets boring within 2-4 weeks.

This is my first reveiw, and I hope it helped someone out :)
Load Comments (0)