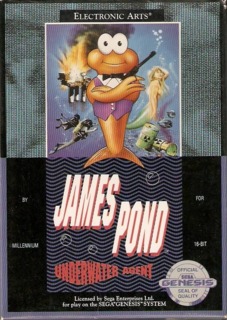 A better version of this infamous fishy platformer...

User Rating: 6.7 | James Pond: Underwater Agent AMI
By staceyw_duckula | Review Date: April 16, 2007
A long time ago I found a little game on the MegaDrive called James Pond. It certainly wasn't brilliant, and had such bland backgrounds. Later on though I got round to playing the Amiga version of said game, and I was quite amazed at how much better it was than the MegaDrive version, especially in the graphics and sounds department. However I don't think it was high enough to have been a brilliant game. The gameplay was rather repetitive - collecting things one at a time and taking them to certain spots in the map - after a while, and the use of a joystick made it a lot harder to play than with a joypad. Despite this, I've always found the James Pond idea intriguing, and I really am impressed by the graphics and sounds. If you turn the music off, you might find some pretty realistic water sound effects [along with a few strange vocal ones]. Sadly though there are few tracks in the game's soundtrack, in which two main ones alternate though each level. Gets pretty boring, you not think?

As for the graphics, there is so much background detail than in the MegaDrive that feels like you really are underwater, and who can forget the rainbow coloured status bar?

It's fine as it is apart from the repetitive gameplay and limited soundtrack, but had the creator[s] of this game been a bit more experienced in game making, Underwater Agent would have been a lot better.
Load Comments (0)