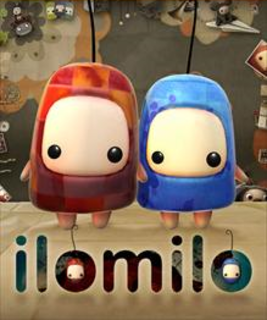 The nonsensical charm can't help but withdraw a grin from it's players. It's also great at challenging spacial thinking!

User Rating: 8.5 | ilomilo X360
By Myntie | Review Date: May 17, 2011
Running over squishy boxes controlling other squishy blocks that function in strange ways and trying to unite with your best friend for tea is certainly worth the tiny amount requested for download on the Xbox 360.

Your able to control both Ilo and Milo (unless on multiplayer) in order to get them to meet on the same side of the blocks. The controls are quite simple, all the two creatures do is pick up and place blocks, walk, and switch who's in control. A level only takes between 5-20 minutes but the course designs are far from simple, particularly as you go up in chapters. Not only are you presented with a maze of blocks between you and your partner but you switch planes on the blocks which can definitely challenge your mental mapping skills. There are blocks that assist in this plane switching, but you'll also find elevator blocks and bridging blocks. All of these must be used in clever ways to close the gap between you and tea time.

There is also, of course, things to collect along with uniting with your friend, like the three colored safkas. Once touched these little fabric blobs follow you until you unite with your partner. There are also photographs and records to collect allowing you to see the concept work and hear the different music tracks outside of the levels. You might even find a floating egg here and there.

The style of the game however, is the aspect that won my heart over. Everything in there is kinda cute, awkward and ugly all at the same time. You'll find boxy cats with mustaches and strange creatures running around in the background of the levels. The boxes you run on change design in each chapter reflecting Ilo and Milo's journey toward the ultimate goal: an eternity of drinking tea together. There were a few things in the levels that were strange and as a player I wanted to interact with, but couldn't. One level in particular there was a black goo ladder but there was no way to do anything with it. It only appeared once in the whole game. You'll also find strange floating objects and the strange creatures mentioned above that get lost, but you can only observe them. Perhaps they were added for charm, but I do wish we could have interacted in some way.

I certainly recommend playing the game on multiplayer simply because it provides a little more of a challenge because of the need to explain and communicate with another person in order to solve a puzzle.

If you want to relax and like having a time filler here and there, I recommend getting this game. I mean, it's has to be good for the brain too, it has puzzles!