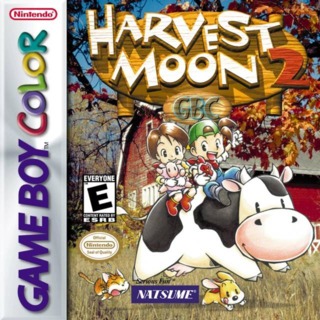 User Rating: 7.5 | Harvest Moon 2 GBC GBC
By Zee3Po | Review Date: February 26, 2011
Story: It's a game about farming. The mayor of the town is ready to close down the farm, and in it's place build a new amusement park. At the last moment your character emerges to save the day. The mayor agrees to let you take over the farm for 3 years. So that's the amount of time you have to turn the dilapidated, old dive into a thriving and prosperous farm.

Gameplay: Roll up your sleeves and get dirty! You now live on a farm with a small house and some fields for veggies and animals. First thing you do is choose to be a boy or girl, and name them (but you only get 4 spaces for names). Next you choose whether you like dogs or cats better. You get the pet of your choice the very next morning. In the nearby vicinity you also have a hot springs which regenerates your character's energy, a fishing hole where you can catch fish to sell, and a town with all sorts of shops. You can buy seeds, get new animals, acquire tools, go to the restaurant, or plan other buildings to expand your farm. Tools: watering can, hoe, syth, sprinkler, axe, and hammer, just to name a few. They are upgradeable. Animals: your pet, a horse, chickens, sheep, and cows. There are also some wild animals in the game. If you hold down the button you can run. Eventually your character will get tired when you work too hard. When this happens you need to eat food, rest, or take a dip in the hot springs.

If you are into real-life farming you will love this game. The game is focused primarily on realistic produce farming, caring for animals, and making money. You still have social events and friends, but this particular Harvest Moon title is not about getting married and making a bunch of friends. It is a farming simulation and you need to work hard in order to flourish. If you are looking for a buddy-buddy, snuggly friendship game, choose a different version of Harvest Moon.

Difficulty: I haven't yet beaten this game so it's hard to say. It seems about right to me. I guess it depends on whether my farm ends up being an amusement park or not. But as far as the basic gameplay it isn't too difficult to get the hang of at all.

Pros: I like the old shcool graphics of the game but some people may not. I'm playing it on the Super Game Boy on the SNES so that makes it a heck of a lot funner than playing it on a tiny black and white screen.

Cons: It may be too simple for some people but I like that about it. One problem is the music resets everytime you leave the screen which is totally obnoxious. Instead of playing the entire jingle it resets from the beginning again and again and again. Just pop in a CD while you play it instead of enduring the ear pollution.

Overall: A pretty decent, addictive, simple game where you farm your ass off. It's a nice, relaxing change of pace from games strictly based on intense action and violence.
Load Comments (0)