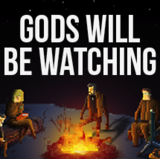 Gods Will Be Watching

An Original, Thrilling, and Intelligent Product

If film director Christopher Nolan made a Blade Runner-esque thriller for a video game, it would be Gods Will Be Watching. What appears to be a standard point-and-click adventure game, is actually a story-driven turn-based strategy game with an emphasis on decision consequence, and ingenious level design. Deconstructeam's various minimalistic approaches result in a product that succeeds in all the right ways.

The basic outline of the game's story focuses upon Sergeant Burden, a freedom fighter struggling to cope with the recent megalomania around the organization, Xenolifer, he once respected. Developing out of hand, and beginning to risk the innocent lives of thousands, he sets out to reason with the conscience of Xenolifer's leader, Liam, as his idealistic organization continues through the downward spiral into "terrorist" specifications. On the surface, the plot seems like a sturdy, yet predictable, piece of science fiction. However, the developers should be lauded for their unique twists on the premise, and non-linear narrative. By the time of the game's conclusion, you're left with a thought-provoking experience, that will have you thinking days after your completion. Overall, the narrative presented here is respectful and satisfying.

Gameplay in Gods Will Be Watching is, as briefly stated earlier, much more a unique turn-based strategy game, rather than an adventure game. However, similar to most PC adventure games, Gods Will Be Watchingimplements a point-and-click system to its format. That meaning, the game "controls" more like an adventure game, but "plays" like a strategy game. All that in mind, there is no denying that it is simply a resource manager, albeit by no means a negative aspect to the game's quality. In fact, it's this main gameplay mechanic that makes the game stand apart from any other independent video game I have ever played. However, despite it's mix of a resource manager and an adventure game's layout, Gods Will Be Watching remains constantly cinematic the entire way through each level. Without spoiling anything, it should be known that each scenario vastly differs from the last, all without adjusting the main mechanics learned through the opening sections; most likely due to its successful simplicity. Each event is tense, and flows great with the position of the story. These various events are all revolved around decision consequence. The goal of each level is usually simplified to a "survive", with the occasional twist on that formula depending on what the plot demands. When playing through these levels, your attention should be more on your teammates than yourself, as the death of allies typically toughen the mission. It adds a great sense of replay ability to try to finish a chapter wit minimal causalities. The decision consequence aspect of the gameplay is interesting, and a feature I'm glad they included, but alas, these "decisions" have no effect on the outside story. I'm sure incorporating a perma-death feature was attempted, and maybe it's best to not include it in a game of this stature, but there's no denying that seeing Burden's friends brutally murdered one moment, then walking and talking fine the next, is nothing but immersion breaking. All that said, be aware that the difficulty of this game is off the rails. If you find yourself getting frustrated on the normal difficulty, turn it down as to not ruin your enjoyment of the game.

Gods Will Be Watching is by no means a technically demanding game, which is a positive in my book, as it allows for more people to play it, even they do not have access to a high-powered PC. The game's minimalistic art style compliments the various undertone's found throughout. This pixelated format presents an almost additional atmospheric aspect to the dark and brooding story found in Gods Will be Watching. It's a format not usually found in games with a story like this (only Gemini Rue comes to mind, for me). On the surface the game runs great, without any notable glitches. However, I will say that I unfortunately encountered a significant number of random crashes during the game's climax in the final chapter. It was so bad to the point it was nearly unplayable, with me only barely being able to finish the game as it is. However, I spoke to a developer of the game, and assured me that the team will be immediately working on an update after the majority returns from Gamescom, so it's likely that this segment will eventually be outdated.

Gods Will Be Watching is guaranteed to be a largely overlooked game in 2014; albeit for it's misleading adventure game looks, high-end difficulty, or over-exhaustion with Summer Indie games. Despite this, do not let this game slip under your radar. It's not only among the best games released this year, but a steal at a lone $10. You'll probably finish just over 6 hours for your playthrough, but its length on the longer side in terms of Indie games. Deconstructeam has not only crafted the best game in 2014 thus far, but perhaps a modern masterpiece that few will ever know of. Gods Will Be Watching is not for everyone, and is by all means not a perfect game, but all signs point towards the fact that this developer has the potential to rise to fame with their next project...