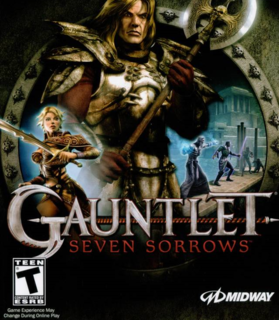 Fun if you have 2 or more people and maybe online, but other than that, this will only keep you busy for about an hour

User Rating: 4.5 | Gauntlet: Seven Sorrows PS2
By Joshgt2 | Review Date: September 1, 2008
This game might have come from a nice history and what not, but it isn't all that fun. I spent the whole game on single player Elf class and destroyed everything, wasn't too hard. Then I redid the whole thing over with another player and it only took us about 5 hours to beat using the Valkarie and Wizard classes. Once we had all of the directional mana skills then we owned the game. There isn't much left after that. Online would be nice if people actually played it online but people don't so that is like useless. Renting is better than buying this game, but sometimes I think that even renting this is not the best option. There are many other better games out there that have this same concept when playing but are much more into detail and not doing the same thing over and over again. I mean really, killing summoning shrines every 10 feet for every freakin level gets old, really quick. I recommend some games such as God of War 1 and 2 or go to your computer and get Diablo 2!
Load Comments (0)