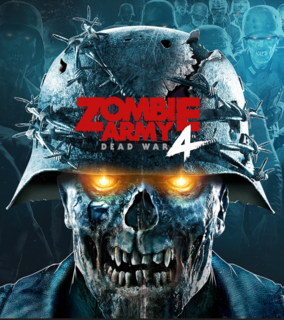 The Ragnarök Campaign & Character pack, and the FREE Horde Map ‘Death Collector’ are OUT NOW for Zombie Army 4: Dead War on all platforms including the newly released Nintendo Switch version!

Zombie Army 4: Dead War is available for Pre-order right NOW on Nintendo Switch and will be released on the 26th April 2022!

April is another big month for Xbox Game Pass; here's the full lineup of what's coming to an leaving the program.

Don't miss this month's PS Plus freebies on PS4 and PS5.

The year is 1946. Europe lies in ruins, torn apart by the nefarious “Plan Z.” A brave band of heroes cast the Führer into hell but little do they know ...

Dead Zeppelin is the third mission in Death From Above, a chilling new three-part Zombie Army 4: Dead War Campaign!

Season two arrives later this year, while season three is due to follow in 2021.

Blood Count is a brand-new campaign mission for Zombie Army 4.

With the release of Zombie Army 4: Dead War, Dave takes a look at the history of the Nazi zombie, and the bizarre occult links and myths that have helped ...

We got to get our hands on Zombie Army 4's new and improved Horde Mode at a preview event and see how the latest installment in the series is coming ...

Where to buy
Zombie Army 4: Dead War
$47.99 at Target $49.99 at Bestbuy
GameSpot may get a commission from retail offers.

Hitler's hordes are back for more in this spine-chilling shooter from the makers of Sniper Elite 4. Abominable occult enemies, epic weapons, and a harrowing new campaign for one to four players await in 1940s Europe as you fight to save humankind from undead Armageddon.