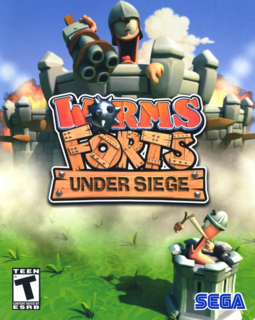 Latest on Worms Forts: Under Siege

Super Monkey Ball Deluxe and Worms Forts: Under Siege! now available for the PS2 and Xbox.

We check out work-in-progress versions of Team 17's turn-based strategy game for the PS2 and the Xbox.

A glimpse at Worms Forts: Under Siege.

We check out work-in-progress versions of Team 17's turn-based strategy game for the PS2 and the Xbox.

We battle with a work-in-progress Xbox version of Team 17's latest annelid wargame.

Sega Europe enters into an Italian distribution agreement with Leader.

After reporting a $25.4 million loss in its last quarter, the troubled publisher reveals it must find new financing by August.

Team 17's newest game in the Worms series will have you building structures strategically in addition to blowing up your wormy foes.

Sega Europe plans to unveil Team 17's next Worms strategy title for the PC, PS2, and Xbox at E3 next month. First screens inside.

Worms Forts: Under Siege! puts you in command of a team of up to four fort-dwelling worms. The game is set in the cartoon environments, and you direct your worm garrison to quickly construct defenses to maximize your strategic advantage, you direct the worms to expand your castle to seize valuable resources, and you have them build weapons of mass destruction to destroy your opponents' fortifications.