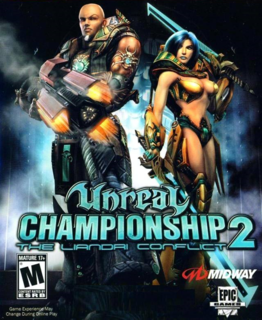 Unreal Championship 2 off to factory

The long-running shooter franchise will take a surprising new direction in its latest Xbox incarnation. Get all the details in our exclusive preview.

We clock in some more time with Epic's upcoming Xbox Live action game.

Midway and Epic stop by to give us an update on the upcoming Xbox Unreal game, as well as a sneak preview of a special guest from Mortal Kombat.

Midway loses $25.7 million during the first half of 2004; president David Zucker says "The extraordinary annual losses are behind us."

Microsoft releases a list of titles scheduled for release in the near future that will support its Xbox Live service.

We jump into Unreal Championship 2's multiplayer deathmatch at E3 2004.

Unreal Championship 2 announced for the Xbox

Microsoft and Epic Games team up to deliver an original Xbox game set in the Unreal universe.

Unreal Championship 2: The Liandri Conflict enhances both single and multiplayer gameplay, including all-new player acrobatics, third-person camera mode, vehicles, and intense melee abilities. In the single player campaign, you'll fight your way through new cities and arenas as Anubis, who attempts to retake his people's Nakhti Rite of Ascension Tournament from the machinations of the Liandri Corporation.