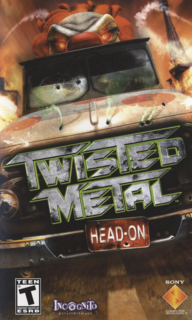 Get ready for the next installment in the Twisted Metal car combat series. Twisted Metal: Head-On puts you behind the wheel of one of 14 destructive vehicles, each equipped with machine guns, turbo boost, and a unique special attack.