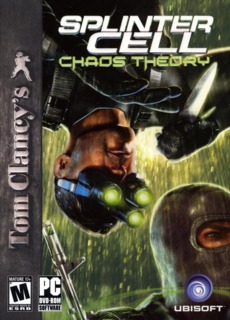 Sam Fisher is a master of stealth, but which of his games is a masterpiece?

You have until November 25 to grab the 2005 stealth game for free from Ubisoft Connect.

Why Does Ubisoft Continue To Avoid Splinter Cell?

Sam Fisher is stealthy, but this is ridiculous.

Sam tries some long distance killing with a sniper rifle.

Check out all the games that Nintendo's planning for the DS and Game Boy Advance in this excerpt from the company's E3 press conference.

Are you gonna say monkey?

These caves sure get dark. Good thing you brought your night-vision gear.

Sam picked a pretty poor hiding spot this time, but it's nothing a nice fixed blade can't handle.

Sam Fisher explains the importance of his mission in this awesome trailer.

It's so nice of Sam to drop in and say hi.

A quick knee to the abdomen sends a guard to the ground.

Even though we didn't see a new Splinter Cell at E3 2018, Michael and Jake decided it was time to give the first one another shot.

You can get Splinter Cell: Blacklist and the other games on sale.

After spending time with Valve, LucasArts, and Amazon, Clint Hocking is headed to Ubisoft Toronto.

It's a Nintendo 3DS blowout on this week's Crosshairs, where we get an intricate hands-on with the hardware, get a sneak peek at a few of the launch titles, and ...

Show me more
Where to buy
Tom Clancy's Splinter Cell: Chaos Theory
$7.99 at Walmart
GameSpot may get a commission from retail offers.

As Sam Fisher, Third Echelon's most skilled Splinter Cell operative, you are assigned to execute a hazardous series of operations to investigate and eliminate a new source of information attacks originating in North Korea. At your disposal is a lethal array of tactics ranging from Combat Knife techniques to experimental prototype weapons skills and more-radical hand-to-hand techniques such as the Inverted Chokehold.