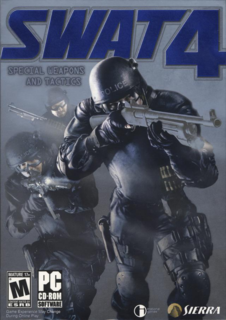 ‘Cops and robbers’ games are nothing new, so whether you’re waiting to play Battlefield: Hardline or happy to pass on it, here are some great alternatives.

An office building is raided in this movie.

Mayhem ensues when a building is breached.

An elite team assembles for an important mission.

Check out some of the fast paced action in SWAT 4.

Bob Colayco gives you the definitive word on whether or not this tactical shooter is the right game for you in this exclusive video review.

See what happens when a demented elderly woman refuses to comply with your orders.

A pair of criminals is neutralized after they attempt to flee.

Teaser video may offer first glimpse of mysterious shooter that has been gestating at the studio formerly known as Irrational Games; is X-com still in the works?

2K Boston's 'next big project' is a 'shooter'

Original BioShock studio hiring veteran designers to work on "unannounced" action title; is it an X-COM spin-off, a SWAT sequel, or something else entirely?

You ever get that feeling when you just want to reck shop on some thugs with squad based commands and stun grenades, well if your like me then you want ...

We inspect the expansion pack to the excellent tactical shooter SWAT 4 and discover that it's more than just a bunch of new maps.

Producer Paul Pawlicki tells us what we can expect in this expansion to this year's tense and exciting realistic tactical combat game.

Get ready for a graduate course in police tactics, as The Stetchkov Syndicate promises to up the challenge of being a member of the elite SWAT team.

With the expansion due out in stores at the end of the month, we catch up with SWAT 4 producer Paul Pawlicki for his final thoughts.

Polyphony Digital goes two-wheeling on the PS2 while 2K Games hits the diamond with a double header.

The year is 2006--it's the 225th anniversary of Los Angeles and gang warfare has reached an all-time high. Three gangs are engaged in a vicious battle for dominance and it's up to you and your LA SWAT team to restore order and protect the city streets.