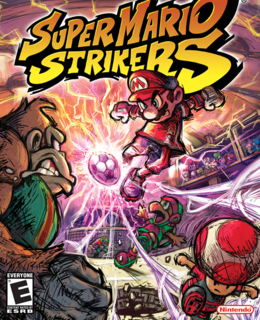 The world's most famous plumber dusts off his overalls and gets ready to do battle in GameSpot's All-Time Greatest Game Hero competition.

Is Super Mario Strikers better than kicking a footy against a garage door? Find out in our exclusive video review.

Wario puts a real charge into his game.

When Luigi starts channeling Neo, get out of the way!

It's end to end stuff in this grudge match between Luigi and Waluigi.

Daisy unleashes an awesome superstrike at goal in this clip.

Toad has mad ball skills on the field, check out this movie for proof.

See Yoshi score a spectacular goal against Donkey Kong in this clip.

Get everything you need to know about Super Mario Strikers in this developer interview.

Waluigi's goalie keeps Luigi's team out of the net, twice.

Mario and the gang take to the pitch in Super Mario Strikers.

The GameSpot's E3 2005 Editors' Choice Awards detail what we thought were the highlights of the show.

Nintendo's foray into sports titles continues with Super Mario Strikers, a new soccer game that's unlike anything ever to hit the pitch. Whether players are freezing their opponents with an ice-cold shell, unleashing a spiny shell on their hapless opponents or making entire teams flee in terror with a roving Chain Chomp, they're sure to see something new around every corner kick.