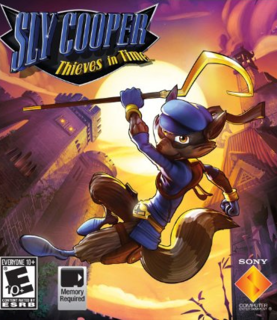 Who doesn't like free stuff? Check out the six titles PlayStation Plus is giving its members in June.

Take a look at this teaser trailer for the Sly Cooper CG-Animated film, coming to theaters in 2016.

A 60 second spot for Sly Cooper: Thieves in Time.

Learn more about Murray in this character vignette video for Sly Cooper Thieves in Time.

Tom and Carolyn search for the Thievius Raccoonus as they guide Sly, Bentley, Murray, Carmelita Fox, and more through this adventure.

Tom meets his ancestors from the future as he reviews the latest Sly Cooper game.

Sly nabbing some coins from some prehistoric guards.

Bentley using an RC car device to sneak past some guards.

Murray does his best to impress the guards by remembering his dance routine. He is also disguised.

Rioichi stealths his way through the gesha house.

Sly Cooper: Thieves in Time - Timing is Everything Part 3

Check out the third and final installment of the Sly Cooper: Thieves in Time animated series, Timing is Everything.

We talk to the president of Sony's Worldwide Studios for SCE about Vita/PSP/PS3 crossplay quirks with developers, the official status of Last Guardian, and the threat of the Wii U.

Sly questions his armor choice before fighting the Moat Monster.

The latest in the Sly Cooper series makes its way to the GameSpot E3 2012 stage show.

Sly secures the tower in order to launch a blimp.

Sly gets his sneak on and pickpockets some enemies and finds a nice Emerald Dragon Eye.

Follow Mike on his magical adventures through the convention floor!

Carlos gives us a quick tour of the Sony E3 2012 Booth to see upcoming titles such as God of War: Ascension and LittleBigPlanet Karting.

Check out the official trailer for Sly Cooper: Thieves in Time for the Vita.

Sly and his gang are back to stealth all over the place! Check out the latest trailer.

Glenn Egan from Sanzaru games reveals the international competition to design a treasure and get it featured in the latest Sly game!

Sly Cooper is having such a hard time finding his book that he has resorted to time travel to find it.

On the Spot - Sly Cooper, Journey, I Am Alive, ME3

On the Spot features demos of Sly Cooper: Thieves in Time, Journey, I Am Alive, Mass Effect 3, and much more!

Developer Glen Egan takes us through the latest demo of a classic sneaking franchise.

Check out the Comic-Con trailer for Sly Cooper: Thieves of Time.

Come get Sly with Mr. Cooper in our stage demo, straight from the GameSpot booth.

Sly Cooper: Thieves in Time gameplay from the GameSpot Live stage show on the E3 2011 show floor. Battle the boss.

Catch all the excitement from the Sony E3 2011 Press Conference.

Sly Cooper: Thieves in Time is set to release in 2012.