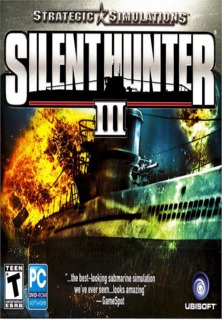 Publisher announces localised version of its online shop; limited time offer to include a "buy one, get one free" game promotion.

Summer remains light on new releases; zombies, Pac-Man attack the 360 and the pint-size GBA grows up with Super Robot Taisen.

GameSpot associate editor Jason Ocampo fills you in on the highs and the lows of running a Kriegsmarine U-boat in this Silent Hunter III video review.

The deck gun is an effective supplement to a sub's torpedoes, especially when attacking unarmed targets.

An Allied escort carrier is sent to Davy Jones's locker with a few well-placed hits.

The captain strikes while enemy warships are engaged with other targets.

A submarine surfaces to man the deck gun after a transport ship is hit by a torpedo.

The player gives orders to the crew.

This feature includes the games of the month, our monthly buyers' guide, and a link to the newest Let's GameSpot.

Sub simulator from Ubisoft dives into retail for the PC; gamers helm the oft-feared German U-boats during the WWII era.

We go out to virtual sea and put this promising and beautiful submarine sim through its paces.

Ubisoft pushes back release to include dynamic campaigns at game community's request.

Ubisoft reveals the lineup of games that it will be showcased at next month's Electronic Entertainment Expo.

Ubisoft announces that it will publish the submarine simulation Silent Hunter III towards the end of this year.

Are you ready to command the deadly U-boats of the North Atlantic? Set in WWII, Silent Hunter III puts you in control of submarines as you take aim against Allied convoys and battleships. In re-creating the intense submarine battles of WWII, you'll hide in silence just below powerful ships, fire deadly torpedoes, or surface and pound enemy aircraft with the deck gun.