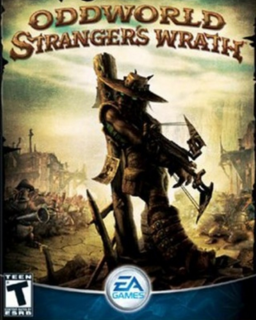 Nintendo gets a big Eshop update this week with dozens (no seriously, dozens) of new releases, including Kentucky Route Zero and Oddworld.

Continue your adventure or start a new one with a monster partner.

Monsters in your pocket.

Check out some of the intense first person shooting in this clip.

What makes the fourth installation in the Oddworld franchise so great? Find out in our exclusive video review.

The dudes from Games Done Quick stop by to show us how it's done as they speed run Teenage Mutant Ninja Turtles IV: Turtles in Time on SNES, Oddworld: Stranger's ...

HD rerelease of original Xbox action shooter coming to PS3 at the end of the month for $15.

Check out a gameplay trailer for Oddworld: Stranger's Wrath, available later in 2011 as a PSN download.

Oddworld set to be reinhabited

Just Add Water announces multiple projects set in the Oddworld universe for a variety of platforms.

Show me more
Where to buy
Oddworld: Stranger's Wrath HD
$89.99 at Walmart
GameSpot may get a commission from retail offers.

In Oddworld: Stranger's Wrath, the new chapter in the Oddworld series, you'll step into the role of the stranger--a mysterious bounty hunter who tracks down outlaws for money. Equipped with a variety of strange weapons that use small creatures as bullets, you'll explore expansive environments ranging from Old West towns and thick forests to industrial complexes.