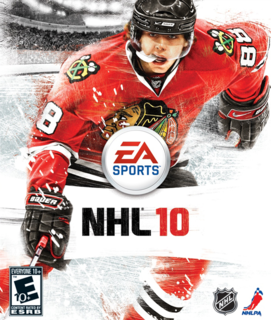 Grab the NHL 10 demo and prove you're tough enough!

Check out some of the stars featured in the upcoming NHL 10.

See Alexander Edler of the Vancouver Canucks get a well-deserved rest in the penalty box for his conduct in NHL 10.

Watch the Boston Bruins try to take the San Jose Sharks in their own shark tank in NHL 10 for the Xbox 360.

Get some game drills in before you take on the whole league in NHL 10.

The New York Rangers take on the Vancouver Canucks in this clip from NHL 10.

Check out Stortini's take on being a tough guy in NHL 10!

David Littman brings us a behind-the-scenes look at NHL 10!

NHL 10 Battle for the Cup Movie

Join the battle for the cup!

David Littman goes in-depth with the new game modes in his demo of NHL 10.

EA Sports producer David Littman talks about Be a GM mode in NHL 10.

David Littman goes in depth with Be a GM mode in his demo of NHL 10.

Show me more
Where to buy
NHL 10
There are no available deals for this platform
$6.98 at Walmart
GameSpot may get a commission from retail offers.

The NHL franchise that has won 19 sports game of the year awards over the past two years begins a new era with gameplay innovations that deliver a new standard of toughness, the emotion of playoff hockey on the ice and in the arena, and over 200 gameplay refinements that replicate the skill and finesse that every fan sees throughout the NHL playoffs.