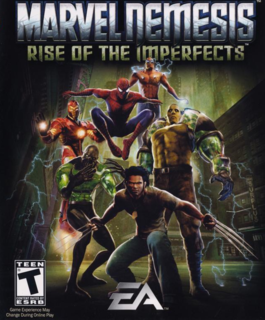 Marvel Nemesis: Rise of the Imperfects

Art for EA Chicago's cancelled Marvel fighting game shows Spider-Man, Hulk, and Captain America as playable characters; game was shut down in 2008 by EA and Marvel.

Rise of the Imperfects moved up

Console versions of EA and Marvel's fighter will step into the ring a week earlier than expected; portable versions still due in October.

We get to try the latest version of EA's upcoming PSP fighter.

EA shows off an updated version of its upcoming 3D fighting game.

Marvel and EA team up to deliver superhero fighting on multiple platforms.

We talk to EA on the eve of the official announcement of its upcoming fighter set to feature Marvel Comics characters.

Marvel versus EA on the cards

Marvel Nemesis: Rise of the Imperfects

Marvel Nemesis: Rise of the Imperfects pits fierce Marvel superheroes against each other in a 3D fighting game. You can assume control of heroes such as the Punisher, Spider-Man, and Captain America, and duel with them in interactive and destructible environments.