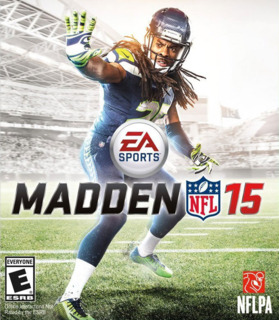 Play every game in the Vault free for a week.

Resident Evil, Devil May Cry, Star Wars, and more all on sale.

A small player with big dreams.

EA Access Vault Adds Madden NFL 15 as Its Next Freebie

Xbox One owners with an Access subscription can now play the latest Madden game for free.

Smash Bros., Destiny, and Minecraft had strong sales, but the highest seller should take no one by surprise.

We're live with Chris Watters and Madden champion Eric "Problem" Wright as they take a look at updated rosters and create their ultimate team in Madden NFL 15!

Nintendo rejoices, as someone is finally using the Wii Remote strap.

New England defeats Seattle 28-24 on final drive of the game, according to annual Madden NFL simulation.

Most-Sold Games of 2014 Include GTA V, Call of Duty, and Super Smash Bros.

Call of Duty: Advanced Warfare topped sales charts for 2014, as well as the month of December.

Madden 15 is a beautiful football game, but its biggest achievement stems from much improved defensive mechanics that make both sides of the ball fun to play.

Judge rules that lawsuit can move forward; EA says it's disappointed by the decision, but plans to fight.

Special version of the game available now for a limited time only.

The PS4 came out on top in US sales despite Microsoft offering a free game to Xbox One buyers.

But hardware is another story, rising 116 percent year-over-year thanks to strong Xbox One, PlayStation 4, and Wii U sales.

Embattled Baltimore Ravens running back will be cut from the game by Friday through a roster update.

Madden NFL 15 delivers everything fans need to own their rivals on both sides of the field, including the most immersive defensive gameplay control in franchise history. Like the Super Bowl XLVIII champion Seattle Seahawks, you can pave your way to the Lombardi Trophy by building a stout defense fit to challenge the best offenses in the game. Fans will also experience an entirely new broadcast presentation that delivers Madden NFL game day like never before with dramatic all-new camera angles, as well as dynamic pre-game and halftime features. It’s not just football, it’s Madden Season.