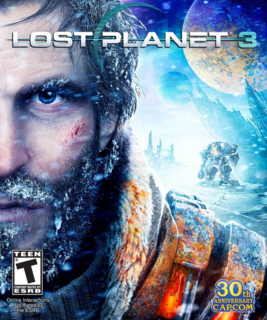 Darksiders 3, Yooka-Laylee, and more are free in August for Xbox Live Gold subscribers.

All three of the mainline Lost Planet games and the extended cut of a classic Resident Evil title are now Xbox One backwards compatible.

Two Resident Evil HD remasters, Okami HD, and more can be yours.

Here's a roundup of all the best deals on Xbox Live this week; Destiny, Borderlands, and more discounted.

Spark Unlimited has laid off all employees and all current projects have been canceled.

Take a look at the Lost Planet 3 Trailer

Watch as Max fights his way through this Lost Planet 3 boss battle with his guns and a mech.

Lost Planet 3: It's a Bug Hunt

Maxwell McGee describes some of the tedium to be found in Lost Planet 3.

Discover E.D.N III through the eyes and ears of Jim Peyton with the Coronis Diary.

This latest video from NEVEC gives a chilling account of the reactions to severe cold, including mental and body responses to harsh environments in Lost Planet 3.

Take a look at what's in-store for you in Lost Planet 3.

This week Lost Planet 3, Final Fantasy XIV: A Realm Reborn, Killer is Dead, Madden 25, and Teenage Mutant Ninja Turtles: Out of the Shadows.

Jim uses his utility rig to swat some flies before securing the area.

Defend the equipment from Akrid before you attempt to make repairs to the Utility Rig.

Jim wanders through a cave filled with eggs and strange orifices in search of an audio log.

Grapple your way to the bottom of a huge ravine and get ready to fend off a four legged Akrid.

Kevin VanOrd braves the cold to bring you this review for Lost Planet 3.

Lost Planet 3 has players return to the extreme and unpredictable conditions that characterized the Lost Planet series. Players take on the role of Utility Rig pilot Jim Peyton who leaves Earth to take on a hazardous but lucrative contract on E.D.N. III.