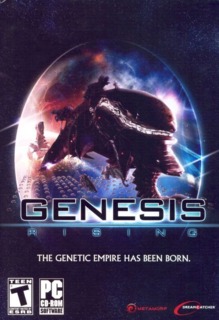 Take a behind-the-scenes look at the development of Genesis Rising in this movie.

Don't miss out on this amazing trailer for Genesis Rising.

Take a look at some footage of Genesis Rising.

Pinnacle to distribute JoWood in UK

Organic starships and genetic engineering are at the heart of the multiplayer mode in this real-time strategy game.

We go into outer space to harvest some blood in Genesis Rising: The Universal Code.

The elevation of the origin occurs in Genesis Rising. Here's our first look from E3 2006.

Set in a mysterious futuristic universe where organic machines are built using genetic engineering, Genesis Rising is a 3D RTS game uses the best elements of role-playing games within the context of a fast-paced real-time strategy game.

6.5
Sign In to rate Genesis Rising: The Universal Crusade