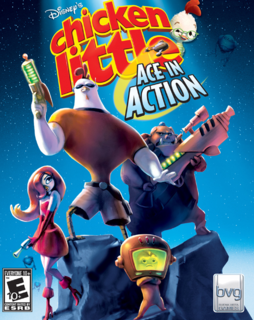 Super Paper Mario makes its way down under.

WarioWare: Smooth Moves, Excite Truck, and Star Fox Command all coming to the continent and UK at the start of 2007.

Take a look at this cutscene from Chicken Little: Ace in Action.

Use powerful weapons to take out your foes.

These pesky enemies are no match for your tank.

Nintendo releases roster of games for upcoming console; 30 by year's end, 41 third-party by end of March 2007, more than a dozen confirmed for launch.

Ace goes into action on the Nintendo DS, and we put him through the paces.

This chicken's not so little anymore. We take a close look at the second game based on Disney's film.

Disney's Chicken Little: Ace in Action is based on the finale of Walt Disney Pictures' animated film Chicken Little. Now you can play as Chicken Little's alter-ego Ace as he battles evil alien robots in a variety of gameplay modes.