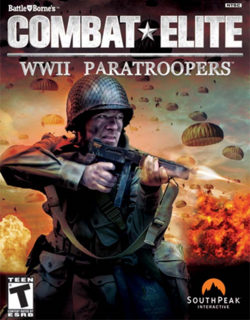 5.4
Mediocre Check out the review

After reporting a $25.4 million loss in its last quarter, the troubled publisher reveals it must find new financing by August.

Acclaim's product lineup for next week's E3 will feature a number of as-yet unannounced titles.

Combat Elite on track, lawsuit or not

Acclaim affirms its WWII title is theirs, and on schedule for a June release.

We get a peek at Acclaim and BattleBorne's upcoming third-person action game set during WWII.

Acclaim announces that it will publish the action game formerly known as Airborne: Liberation in North America in June.

Interplay and BattleBorne announce that they're working on a World War II-inspired third-person action game for release in 2004.

Supported by an army of more than 17,000 US and British paratroopers, you must stop the Nazis from occupying Europe during WWII. Fight with authentic weapons and vehicles alongside brave Allied troops through rolling hills, small farms, and war-torn cities throughout France, Holland, and Belgium.

There are currently no videos at this moment for Combat Elite: WWII Paratroopers