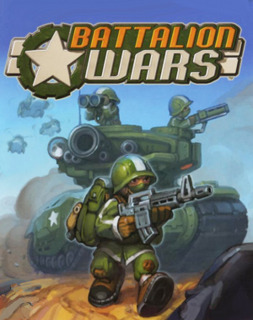 Is Battalion Wars a battle worth playing? Find out as GameSpot editor Bob Colayco gives you the details in this video review.

When you can't take them from below, just bomb them from above.

Although it's not the River Kwai, this bridge is still a strategic choke point.

Careful coordination between land and air groups is crucial to a successful campaign.

On the move, your tanks prove they can dish out as much as they can take.

GameSpot editor, Justin Calvert, gives us the latest update on Battalion Wars in this Video Preview.

Avoid the gunship while you race your Jeep through an enemy base.

Watch a squad of troopers advance on an enemy stronghold.

A chopper flies low trying to hit your artillery that has been blasting the enemy into submission.

Check out some impressive footage of Battalion Wars for the GameCube.

Alex Palomares takes you on a guided tour to Nintendo's Booth on the E3 2004 show floor.

Take a look at all of the first party GameCube games shown at Nintendo's E3 2004 Press Conference.

The game formerly known as Advance Wars: Under Fire will be at E3, and we've played an updated build. Check out new impressions.

Battalion Wars marches off to retail

We log some quality time with the game formerly known as Advance Wars: Under Fire, and discover why warfare has never looked so cute.

A global conflict has reached a stalemate in the console version of the Game Boy Advance series Advance Wars. The evil Kaiser Vlad, seeking to take advantage of the standoff, has assembled an army of shock troops, forcing The Western Frontier and the Tundran Territories to ally and fight back.