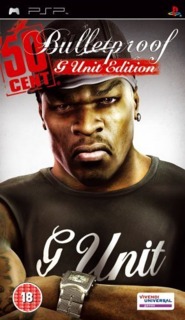 4.8
Poor Check out the review

With Madden on shelves, the summer doldrums are officially over and a wave of new releases are on the way to stores this week.

If you like puzzle games without much violence in them, you probably won't want to play 50 Cent: Bulletproof.

Watch as 50 Cent smokes some fools in this clip from 50 Cent: Bulletproof on the PSP.

Take a look at some footage of 50 Cent: Bulletproof in action.

50 goes one on one against some ski masked guy packing some heavy weapons.

Watch 50 gun down enemy after enemy on his way through the building.

50 stabs some fool in the gut.

50 makes his way through the park unscathed.

50 Cent makes his way to the roof to lay down some fire.

Watch 50 Snipe from the roof top.

50 Cent takes his fight to the junk yard.

Bullets are coming from all directions in this clip.

50 Cent introduces you to his crew.

You can play as 50 Cent as he blasts his way through the streets of New York in 50 Cent: Bulletproof. Your path will cross those of drug and weapons dealers, informants, and a myriad of other shady characters as you and the G-Unit take on some of the largest crime families in New York.