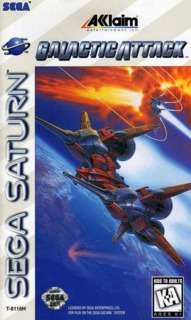 The best saturn shooter to see a Western release gets a near perfect arcade port....

User Rating: 8.4 | Layer Section SAT
By rmoxon | Review Date: October 25, 2005
Galactic Attack was originally released as an arcade machine in 1993 and was called Rayforce before being ported to the Saturn as Layer Section for a Japanese release in 1995. The game underwent a final name change and became Galactic Attack for the U.S. and European market the same year

If you have played any vertical shooter Galactic Attack will look very similar in that you have a ship and you move up the screen shooting other ships but it does have at least one unique feature that distinguishes it from every other game in the genre. This feature being your ships ability to lock on targets that are on below you and fire lasers at them, while enemies on the same level as you must be taken out with the gun turret. This feature not only adds depth but greatly tests your skill as you get further into the game and have to quickly decide which weapon is needed to destroy each bad guy as the screen fills up with enemies at an alarming rate. Like most games of this type Galactic Attack is difficult and in some respects the lock on ability just makes it even more challenging, but as a result it is an equally rewarding experience. If you complete this game in one continue you aren't just good, you’re the master..

Despite being a near perfect port Galactic Attack does suffer slightly from the same thing many others do. Being a few years old upon this versions release the game looked slightly old hat and of course hasn’t really gotten any better with age. This is a strictly 2D affair and so even compared to other Saturn shooters that took better advantage of its technology the game looks slightly iffy but then Galactic Attack is all about gameplay so its hard to get too upset about this. The game also takes up about three quarters of the screen in total and uses borders down each side of the screen to give the full arcade effect. The result still seems to be a slightly scrunched up image though and I'm pretty sure there is some of the picture missing. The game can be played in an Arcade mode, which requires you to flip your TV on its side to get that authentic feeling, but whether you want to risk damaging your TV in the process is up to the you. On the plus side the music is great and again reproduced from the arcade perfectly.

So this home version of Rayforce does have its shortcomings but they don't really ever get too far in the way of what is still a classic arcade shooter. Not only is this actually better than its two sequels Ray Storm and Ray Crisis, it is also the best game of its type to get a Western release on the Sega Saturn. If you own a Saturn and like to shoot things, then you should really try and get hold of this game.
Load Comments (0)