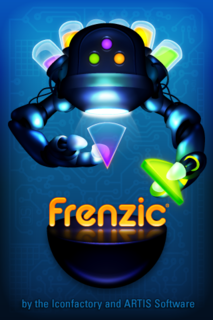 Frenzic is a game of quick-time recognition, and though it's not deep and substantive, it's good in short bursts.

Frenzic, by The Iconfactory, though available on the DS, is well suited for the iphone. Best enjoyed in brief snippets of play, it's fast paced and eye-blurring puzzles bring together your short-term memory skills and color recognition skills to bear in a legitimately panic-inducing manner.

The basics of the game play out with six 6-piece pie containers (like the pieces in Trivial Pursuit) laid around a central hub which is tied to a timer. A colored pie-piece appears as a timer runs down, and you must select a container to place the piece in. There are 3 colors of pieces total, which is more than plenty to keep you in stitches. If you complete any container with one color only, you get a bonus life (which expires if the timer runs down before you place a pie). Though you'll want to try to complete as many containers with single-color pies, you'll have to be flexible, since you never know what's coming next. Furthermore, since you cannot rotate or turn pieces (they need to go into containers "as is") there's quite a bit of give and take with thinking ahead. Though in the early stages it's good to build up extra "lives", in later stages it's often best just to stay alive, since the timer continues to run faster and faster.

Added to this mix are a few "bonuses", including Nuke (which clears all containers), Multiplier (which doubles scores for a short period), and the Slow Timer (which slows the clock significantly for a short period). Each of these are incredibly useful, though best saved for critical moments.

The gameplay of Frenzic is, well, frenetic. Each round goes faster and faster, and keeping tabs on what on the board is open or which container you're setting up for bonus lives gets difficult quickly. Yet despite the fast nature of the play, Frenzic feels more exciting than painful, though it's a tad on the masochistic side. There's enough gameplay elements here, and a solid basis for play, to keep this one around for short bursts. It's not deep enough to warrant a sit-down session, but it doesn't need to be either. For what it is, it's a solid game that will push you to further your high scores in those in-between moments, or as a pallete-cleanser from other, more robust, games. For $.99, it's hard not to recommend it.