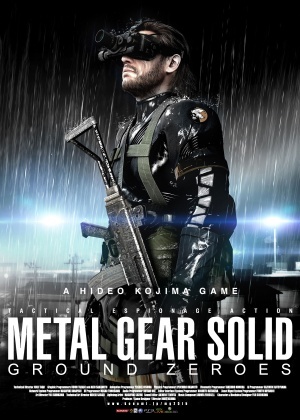 The latest installment in the Metal Gear series stars Big Boss and takes place after the events in Peace Walker. While this game includes many new features, and also happens to be the first open world Metal Gear game. Kojima has recently stated that the plot will be quite mature and it deals with many 'taboos', and also stated that the game 'may not release' and if it does, it 'may not sell well'.

Hideo trolled us, Grounds Zeroes, Metal Gear Solid 5, and the Phantom Pain are all the same game.

We love you, Mr. Kojima.

Hideo served us yet again. Grounds Zeroes will be released first, and is a prologue to the Phantom Pain. They are two separate games.

Today, Kojima stated that together, Grounds Zeroes and the Phantom Pain make Metal Gear Solid 5, however both titles will be distributed separately. He also stated both will be playable on the PS3 and Xbox 360.

A while back, a mysterious Metal Gear Solid 5 themed video released on youtube. Get all the info here.

I actually just found this interesting article about The Phantom Pain the other day that brough forth the idea that this could all just be in Big Boss's head.

#3 ShadowofSonic
Member since 2009 • 24616 Posts
I'm not sure, but Kojima is a visionary. I'm sure it'll be insightful and fiddly-doo fantastic.
6 years ago

You know you're tired when you see this topic, walk away, and then you cannot find it after looking over the board three times. I came back a few hours later and still couldn't find it. I hope this is a glitch because even though my eyes are burning, that would make me question my vision.:P

Really looking forward to the game, and am more excited about the open-world gameplay than anything.

#5 ShadowofSonic
Member since 2009 • 24616 Posts
Gamespot's glitches were getting insane yesterday.
6 years ago

#7 ShadowofSonic
Member since 2009 • 24616 Posts
They are all fantastic and best-game-ever material. Enjoy.
6 years ago

yeah the first one had a great story, can't wait to play it for myself this time
6 years ago

MGS3 was probably my least favorite. The story was great, but some of the gameplay elements broke the flow of the gameplay. I liked the camouflage, food and cure stuff, but I had go into that slow menu around every corner.:x

However, my least favorite MGS game is still one of the best games overall.

#11 ShadowofSonic
Member since 2009 • 24616 Posts
I feel you, bugbag. I never actually bothered to change my camo. I always stuck with T.Stripe.
6 years ago

MGS3 was probably my least favorite. The story was great, but some of the gameplay elements broke the flow of the gameplay. I liked the camouflage, food and cure stuff, but I had go into that slow menu around every corner.:x

However, my least favorite MGS game is still one of the best games overall.

I feel you, bugbag. I never actually bothered to change my camo. I always stuck with T.Stripe.ShadowofSonic

I did too, but you can't do that on the European Extreme mode.:x

isn't there a clone of snake in that one?
6 years ago

Spoilers for the whole clone issue.

[spoiler] Big Boss had three clones, Solid Snake, Liquid Snake, and the most perfect of the three, Solidus Snake. [/spoiler]

I feel you, bugbag. I never actually bothered to change my camo. I always stuck with T.Stripe.ShadowofSonic

lol, same here. Never really cared much for the camo system but the cure stuff was amazing IMO.
6 years ago

He went through a lot. It was cool though because he was absolutely committed to his mission. Every time he got hurt he soldiered on.

[spoiler] If there was one thing that would have broken me, it would have been, "Then cut out his eyes." I would have probably started talking at that point, even if it meant death. Everything else I would try to soldier on through, but would probably be killed by the first confrontation with the boss.:P [/spoiler]

[spoiler] Being shot in the eye would be easier. It would hurt really bad, but at least it wouldn't be as slow as a knife. One shot and your eye is gone, you don't have to deal with it again. You just have to endure the pain that comes after losing your eye. With a knife, just knowing you may be able to make it stop would single handily break you. [/spoiler]

Let's get back to Ground Zeroes..

#31 Kman5507
Member since 2009 • 7902 Posts
What about if a ninja lady stabbed you with a piece of glass after stabbing your already dead daughter? I think that would be worse!
6 years ago

What about if a ninja lady stabbed you with a piece of glass after stabbing your already dead daughter? I think that would be worse!Kman5507

Being stabbed in the eye is easier than having your eye cut out though.:x

This discussion is starting to become too much for gamespot. I'll stop going into such details.

What kind of 'taboos' do you think will be in this game?

^I don't think so. I'm thinking it will be strictly political.

I'm going to honest here, I think it's immature to add a lot of mature content, as strange as it sounds. I don't need to hear a lot of bad language and see a lot of drug use to make me feel like I'm playing a mature game. It does the exact opposite.

Look at Killzone for example. I think they just added all of that senseless bad language to try to get a reaction out of the player, and make it feel more 'mature', but all it did was make the game feel as if it was written by a twelve year old. Same with Crysis 2.

I'm putting trust in Metal Gear though. It has never failed me and I don't think it will now.

one week and we will know what game this game is :3The_Last_Ride

Don't you mean one week before more information is released?
6 years ago

I can't wait to see more of this game. I'm really excited about the open world gameplay.

Hello my fellow computer friend. I am writing to you in the most dire of situations and need your assistance. When will Ground Zeroes be released, and how can I play it being a computer? Seriously, why don't people use me for gaming anymore? error: error: System shutdown... System reboot. Rerouting.... Rerouting... Hello, sorry about that. I'm a Windows 2. I'm just a miserable pile of junk... Rerouting... Page not found. Page not found. Give me a moment. Redirecting... System shutdown. Error... Keyboard installation failed. Error.

#43 ShadowofSonic
Member since 2009 • 24616 Posts
LOL, Mr.Computer. I can at least play PC games from up to 2004-ish and I have a PLaystation emulater installed. In your face, lesser model.
6 years ago

[QUOTE="The_Last_Ride"]one week and we will know what game this game is :3ShadowofSonic

Don't you mean one week before more information is released?

yeah, but they need to reveal something about the game that is real soon