#201 MetroidPrimePwn
Member since 2007 • 12399 Posts
Just got Gyrostarr about an hour ago. Pretty great so far, I really wish there were more Tunnel Shooters this-gen.
11 years ago

Mega Man 9 has been confirmed for WiiWare by Nintendo Power. The scans are out there, but I can't post them. The game supports 8-bit graphics.

WiiWare keeps getting better and better. I need me some Points.

"None other than Takahashi Meijin, Master Higgins himself, has confirmed that very early production for a new Adventure Island is underway. Mr. Meijin also stated that the game will 'probably' be coming to WiiWare. For those worrying about a motion-controlled Higgins, you can stop bellyaching right now. Takahashi doesn't want to force those aspects into a sequel, because he knows they could ruin the feeling of the franchise." Source (thanks GoNintendo)

Thought the name had been changed?

Strong Bad Interview
Interesting tidbit - "What we ended up with is the ability to compose an email on his laptop (Lappy), attach a screen shot—Strongbad can take pictures with his personal digital camera (Snappy) almost anywhere in the game—and send it to any of their Wii Friends, even if they don't have the game. These "Letters from Strong Bad" even incorporate players' Miis in an interesting way that I'll leave as a surprise for now!"

- Due out this August in Japan
- Wiimote motion control to tilt the table
- shake Wiimote too much, and the table will freeze and TILT, just like a real pinball machine
- different types of pinballs: Burst Ball for more damage, Split ball creates two balls
- 800 Wii Points
- Extra DLC coming (power-ups, tables, and more)

Space Invaders Get Even Information #210 deactivated-586249e1b64ba
Member since 2004 • 7629 Posts
And in other slightly older and off-topic news, Eternity's Child (Shocked that this hasn't been listed here) by Luc Bernard who is also working on World of Goo, has been released on Steam back in July 31. :) A WiiWare version is also in the works though there as of right now, there are only plans for it to be released in Europe. :(
11 years ago

Pick it up today! It's 1,000 points. And it's getting really great reviews:

Already been playing it...But I have to go to work now:cry:

The game is so funny if your already a homestarrunner fan. Not sure if it would be for someone who is not.

Nice. Will go download it once i've finishes my other Wii games...

Just beat it...Now I have been going back and finding all the extra stuff

Funny game, can't wait till next month for the sequel

Updated, but the thread is certainly not up to date. 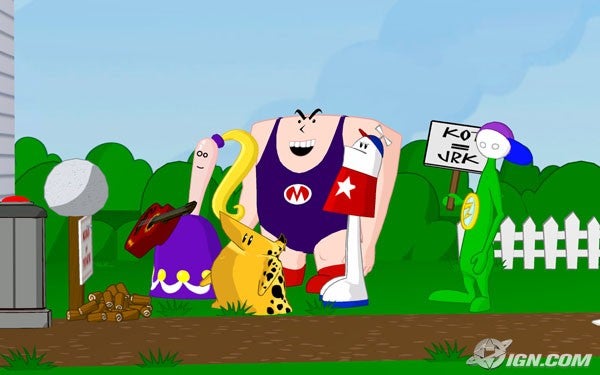 Website: Click Here
Check out Strong Bad and the gang in his first adventure! Navigate Strong Bad through the Homestar universe in this point and click adventure by the masters of the genre - TellTale.

All the madness of Bomberman on WiiWare! With online and local multiplayer (up to 8 players) the fun doesn't ever have to end! You can even play with your Mii.

Website: Click Here
In short, Potpourrii is a puzzle game that keeps you hooked with its colorful visuals, beautiful effects and easy-to-use controls using the Wii Remote™ controller. Play alone or with a second player, and even use your Mii™ character.Homesrfan
11 years ago

Does anyone have Bomberman?

I really want it in America. :(

Return of the WiiWare thread? Who would have thought?

It's not completely updated, I've got to fix it up a bit and add more games, but yeah, look here for weekly updates.

Perhaps add ONSLAUGHT to the list?freek666

Heck yeah! Most anticipated WiiWare game ATM. Not that we ever really know what's coming out each week.
10 years ago

Return of the WiiWare thread? Who would have thought?

It's not completely updated, I've got to fix it up a bit and add more games, but yeah, look here for weekly updates.

One thing you can fix: the Last Flight description has "culinary" as "culminary".
10 years ago

This thread is incomplete without World of Goo.FFCYAN

#230 Willy105
Member since 2005 • 24974 Posts
I remember when this came out. AT THE EXACT TIME AS MINE. Except yours was 3 seconds behind. But yet mine flopped while yours became a great success. Secret?
10 years ago

I remember when this came out. AT THE EXACT TIME AS MINE. Except yours was 3 seconds behind. But yet mine flopped while yours became a great success. Secret?Willy105

I would add Swords & Soldiers, Eduardo the Samurai Toaster, Eternity's Child, and Toribash to the mix. :)nintendofreak_2

#234 HarlockJC
Member since 2006 • 25546 Posts
[QUOTE="Willy105"]I remember when this came out. AT THE EXACT TIME AS MINE. Except yours was 3 seconds behind. But yet mine flopped while yours became a great success. Secret? It's the pizza....When I go to post in your treads hunger over takes me
10 years ago

What about Bit.trip Beat? Looks pretty good to me.Trailer hereSpruceCaboose

Added! :) Thanks. I read about it in GI and thought it looked good. Seeing the trailer only made it look more amazing to me.
10 years ago

Just to let you guys know, I just got Lit and its definatly worth $8. It's not as difficult as the GS review claims though.DaBrainz

You know Gamespot, they took away points from Fire Emblem: Radiant Dawn for being too hard. Difficulty just isn't their thing.
10 years ago