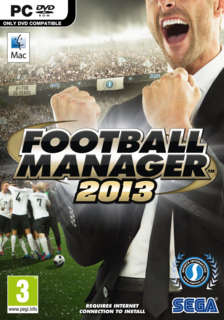 2013 is the best Football Manager game to be ever released.

User Rating: 9 | Football Manager 2013 PC
By Domstercool | Review Date: February 25, 2013
When you have a studio dedicated to creating the same type of digital entertainment every year, you expect them to become the masters of their creation. This is what Sports Interactive have done. Over the past 20 years, these developers have crafted the art of the football management game, to the point where a review means nothing to the millions of fans that love this franchise and buy it religiously. Each year, new instalments come with improvements and more features, making Football Manager an even deeper and more complex title. This year's version not only includes over 900 enhancements, but also new modes of play aimed at people who might not have enough time on their hands to jump into the complexity of what Football Manager has become. So let's get onto the shiny new stuff that is packed into the 2013 edition.

First up is Classic Mode, a redesigned take on the Football Manager gameplay that flows at a much faster pace than the standard mode. The best thing about Classic Mode is that it manages to bring this streamlined version without the loss of its huge player database, 3D football match engine and other in-depth background calculations. What is removed from Classic Mode is the time-hogging features, which is clear from the get-go when you initiate a new game and see that you can select no more than three country leagues to be fully represented in the career.

In Classic Mode, press and staff meetings are near non-existent – only when very important topics need addressing – while training is limited to team training, cutting out all the in-depth control specifically catering to an individual's training needs. Completely removed from Classic is any sort of team talk mechanic; it's straight into matches, with an option to completely skip the 3D engine and just have an instant result. Time needed to get through a season is drastically reduced because of this. In summary, you are taking control of the team, tactics and contracts for existing or new players in this mode. It is perfect for anyone who is new to the franchise, or for someone who wants to manage a team without the added complexity of the full career mode or does not have the time to spend hours upon hours to get through a season. Best of all, it still requires you, as a manager, to put in the work and drive your team to success. Somehow, Sports Interactive has managed to create a streamlined mode that still feels 100% dependent on the gamer playing. Classic Mode reminds me a lot of the initial Football Managergames, or even Championship Manager before it, and is one of the best additions for 2013.

Slightly tainting the Classic Mode is the inclusion of unlockables, but these are not what you are thinking. Unlockables can be bought from the in-game store to help players advance much faster – in other words, cheating – by gaining an advantage. They range between 0.69p – 0.99p, and can modify things such as having no work permits, no loan restrictions, no transfer windows, or being able to see all the stats of players without the need to scout. Lastly, there is also a bank balance, where you can pay real money to give your team millions in the bank. These are all optional features, but the idea that these need to be paid for worries me. You can unlock around half of them by gaining Steam achievements, but if that was implemented, why not all of them? Thankfully, these unlockables are limited to Classic Mode only.

A little less demanding, but much harder and mentally stimulating, is the Challenge Mode, a feature that incorporates the streamlined approach of Classic Mode but puts the player in a tricky situation with his team choice. There are four tasks that put your team at a disadvantage, such as finishing the remaining matches of a season undefeated, having a squad of stars injured so you have to use your less skilful players to win, saving a club from relegation, or taking a squad of wonder kids to win the league. No matter which challenge you pick, you will be given an allotted amount of time to reach the desired outcome. Challenges are short and sweet, and you can often finish them within a few hours, but coming out of the challenge successful is another story.

Hardcore Football Manager fans need not worry about these trimmings, as the main Career Mode is back and contains more features and interactions. One of the most welcoming upgrades is the refreshing interface (also seen in Classic Mode) that turns Football Manager's looks into a stylish and clean menu system with smooth transitions between browsing the data overload that is presented. Even during the loading sections, data is brought down on the tabs to inform you of what is happening in the world of your management career. It takes a while to find everything, but once you become used to the layout, everything will be within easy reach and cleanly presented.

Another big revamp is the training system, giving the option to easily attend to an individual's training schedule. I also found it much easier to see my training sessions with the team, due to use of the calendar layout. You can use a slider to affect how much the team should concentrate on match training, what type of match training, and the focus. If you are a bit scared of all these options, then you can get advice from your staff members. The staff advice comes in handy for multiple sections of the game, especially if you are just overwhelmed with all the data thrown at you. You can also change the staff responsibilities to make them handle more of your job. For example, say you are fed up with resigning contracts for first team players or hiring under-18 youths, you can leave this to be automatically done by a member of staff. The board members will often ask for meetings to offer their advice as well, so there is plenty of help available – fantastic if you just want to focus on team management for a while.

Getting into the match comes with options for team and individual talks to motivate players. This seems a bit random at times. I was in a quarter-final cup match as Huddersfield Town against Liverpool, and I gave my passionate team talk to go out there and give it their all. Two of the players lost motivation. What? How does that work? Unless those two despised me as a manager? You will be doing a lot of press talks between matches, and you are given choices of dialogue along with how you emotionally feel (calm, passionate, aggressive, etc.), but these are still the same choices, only it is reported that the manager was saying it in the emotion selected. It would be more believable to show you were angry through different dialogue choices, rather than the basic implementation it has at the moment.

The match engine has been upgraded, not just in 3D, but the general layout of information that is given as the game plays out. An assistant will post notes on the side of the screen alerting to key parts of the match, and you can use this information to judge substitutions or change basic tactics on the fly without the need to go into the menus. Watching your team perform on the pitch in 3D is more enjoyable now that the animation is better. It is not on the same levels as what you see in FIFA or Pro Evolution Soccer, but it does its job well. Occasionally there are hiccups, such as when a player glides rather than running, or a goalkeeper spins on the spot rather than attempt to get the ball; but mostly it runs fine.

I could write an essay about all the new additions that make Football Manager 2013 a better title than the games before it. Steam-based multiplayer, for example, works rather well and features the ability to import your team as well as forcing a turn if no response after a given time. I should note some of the problems I have with the game. There aren't many, but I feel that having to deal with all the extra press and staff meetings is a little too much. I guess it is representing the realism of the sport, but for me these were the tedious parts that I would not care all that much about, often getting to the point I would ignore them or assign to another member of the staff. There really are no other complaints with the game. Obviously, if you never liked Football Manager because it did not let you play, then this is not for you and never will be. It is a title that when broken down to the barebones is an uber database doing millions of calculations, with a fancy menu and stats that make you feel good or bad about how you manage a team, while exceptionally keeping to the realism of the sport.

There is nothing else to say about the game. It almost sounds like a broken record by saying this, but 2013 is the best Football Manager game to be ever released. This time, there are more features bundled in than ever, making it worthwhile for football fans that would like to test their management capabilities. Classic Mode is a genius inclusion that could bring in new people or even older fans that might have given up on the series, maybe due to commitments or because they did not enjoy how complex Football Manager has become. Best of all, that addictive nature is still in full swing. Football Manager 2013 is an innocent drug that is always in the back of your mind, processing the possibility of a match outcome after another click of the mouse. When you are mesmerised to that level, it's hard to say anything other than this is a brilliant piece of videogame entertainment for fans of the beautiful game.
Load Comments (0)