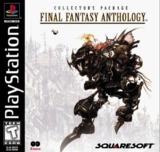 A great re-release of 2 epic Final Fantasy titles. One never before released in the U.S. and the other a classic.