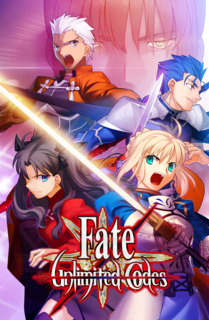 User Rating: 10 | Fate/Unlimited Codes Portable PSP
By YamataDragon | Review Date: October 5, 2009
Featuring 17 fighters and a variety of modes to play, Fate/Unlimited Codes is a promising fighter. The battle system is easy to learn. The game has a huge choice of modes you can play. In Arcade mode, you select a character and fight against eight other characters. VS CPU pits you against the computer on the difficulty of your choice. VS 2P let's you fight against another player online. Spectate let's you watch 2 CPU characters duke it out. You can try to beat the other 16 characters without dying in Survival mode or see how long you can survive in Endless Survival. There are also Missions to complete. If I had to pick one flaw with this game, it would be the price. $29.99 isn't cheap, but it's worth it. The cost of importing it would be much higher so I thank Capcom for translating the text and releasing it at a cheaper price.
Load Comments (0)