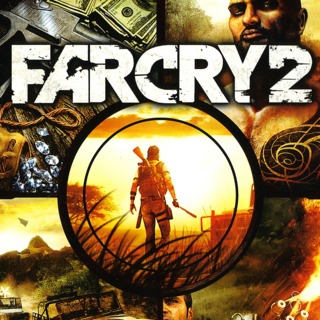 A definite improvement from its previous installment however there's still lost opportunities.

While the world was ogling over first-person shooters like Doom 3, Half Life 2 and even Unreal Tournament 2004 for which, incidentally, all developed by famous companies like id Software, Valve and Epic Games respectively, straight out of left field arrived a FPS game named Far Cry from Crytek and the net result was a brilliant display of technical prowess that requires an equally powerful PC to run it. However, as good as it sounds, it has its flaws like a pretty lame storyline as the game felt like a tech demo – that is, they have a great engine to toy with however needs a purpose to play the game; a.k.a. plot / storyline.

Why I’m giving a detailed opening about Far Cry’s first game is because Far Cry 2 (and thus forms the bases of this review), as good as it sounds with its visuals with plenty of explosions (if you manage to see the promos / trailers and all that wonderful stuff), it suffers from the same fate as in Far Cry however to somewhat a lessor extend. It also derived from the same gaming engine yet heavily modified Dunia Engine, the visuals certainly meet up to the awesome standards with brilliant lighting effects, beautifully rendered weather patterns and even has fire physics that’s simply rivals the real thing. Yet there are elements of improvement needed to bump this game from simply good to great.

To start things off, the plot contains the idea of a civil war between two warring factions being the United Front for Liberation and Labour (UFLL) and the other, Alliance for Popular Resistance (APR). Both factions derived from the previous collapsed government however now engaged in civil war. Suppling both sides of the war is a ‘hidden’ notorious figure named ‘The Jackal’. Your task is to eliminate the Jackal thus stopping this civil war.

It is my obligation to applaud developers Ubisoft Montreal for choosing Africa as the location of choice. It’s certainly refreshing to see this; that is moving away from the ‘norm’ (i.e. using the current media’s ‘hot spot’ locations). In addition, yours truly have visited East Africa for an extensive period of time. So, this game brought all the environments that Africa has to offer – that is traveling through the savanna (equivalent), dense jungles and sandy countryside all teemed with various wildlife, save Mount Kilimanjaro and Mount Kenya et al.

Whilst the environments are simply gorgeous to see (yet all highlighted using the entire 32bit brown palette), the teaming wildlife are simply a handful of zebras, gazelles and buffalos with a dash of domestic ones like chickens and goats. You can also hear monkeys screeching about however that’s about it – quite disappointing to say the least and a massive lost opportunity. Just imagine seeing a towering giraffe in the distance or a yawning hippopotamus but nope. At least you can run over the available animals if you wish.

The plot about the Jackal is another lost opportunity. Whilst the overall theme is mostly about corruption, I was hoping for a much stronger storyline as most of the missions involves just blowing things up. Yet the way to go about it, whether be stealthy or simply go all guns a blazing is a bonus. Going back to the main plot, that set of missions is not too bad to swallow however the locals really needs a stronger backstory. Meaning all the locations like Rail Xing or the Dental Clinic to name a few needs to be fleshed out when visiting the area instead of ‘Go to the Dental Clinic and kill so and so’. I believe by fleshing out those ‘sub-areas’ by giving it a small backstory will bring on further realism to the locations other than just a name, for which it actually is, just a name – nothing more, nothing less.

Speaking of realism, this is where the game truly shines like the brightest star in the sky. The entire gameplay is built upon being as real as possible ranging from guns jamming to driving from one location to another. Heck, even the mini map is real-like as the player brings up a handheld map – simply a stroke of brilliance. Likewise, if you are expecting a call, your character will answer the cell phone.

When you are driving and the vehicle gets a beating, your character can lift the bonnet to fix it. It even goes as far as near-death experiences as you have one last ‘saving grace’ to heal yourself ranging from snapping your arm back into place or pulling out a bullet lodged deep in your leg among many others. Lastly, the character you control suffers from malaria and needs to take a pill every 30 minutes or so real time. Running out of pills can result death however they are easy to obtain via doing side missions for the church.

To save the game, you need to enter the safe house however all safe houses needs to be ‘unlocked’ – meaning killing a handful of mercenaries (usually three of them) before entering the safehouse to save the game. There are other save points like in the gun shop and so on however, in most instances, you need to work for it to save the game and it actually works quite well as it requires you to plan your attack then simply go all Rambo like. And besides, the AI, just like the first instalment, are very cunning and will stalk you down once you make a noise. However, once the AI have been alerted, they all have super aiming, regardless if you are hiding among the heaviest of foliage.

Another great feature in this game is the concept of buddies. In the beginning of the game, you get to choose one of nine characters and each has a decent background story to go by. Once selected, the remainder eight will become your buddies in the game for which can assist you in the heat of battle and provides you side missions in exchange for the game’s currency – diamonds. So, you can say diamonds are not simply a girl’s best friend here. With regards to buddies (and Incidentally you can locate more in your travels), they all feel very real especially when they save your sorry ass, for which they did many times during my playthrough.

About the diamonds, this is the only currency where you can buy weapons and perform upgrades and purchasing manuals (i.e. increase accuracy). All missions, regardless if it’s the main storyline or side missions, earns you a certain amount of diamonds with the exception of malaria tablets (given by doing side quests for the church). In addition to this, there’s also a mini game where you can locate briefcases for which can earn you one to three diamonds in each case. They are all scattered over the place and to locate them, they all emit a signal that your GPS can track at short distances. I also enjoyed this feature as it provides me an opportunity to explore this wonderous world.

Other ‘searching mini games’ are locating the golden AK-47 and the Jackal tapes. The golden AK47 has a massive reliability rate hence the chance of that gun getting jammed is pretty close to zero. There are eight of them to find and all emit a signal similar to the diamond’s briefcase. Also, there’s no difference between the eight of them. The Jackal tapes are definitely worth locating them as they certainly enhance the backstory of giving you a deeper insight of the Jackal’s thoughts.

Speaking of exploring, the ‘world’ is divided into two regions being simply north and south. Both regions you can explore anywhere at your whim however it’s not a ‘true’ open world game as advertised. For me, an open world game means I can go anywhere, anytime with minimum ‘invisible’ walls. However, I have encountered too many invisible walls as there are times I cannot even scale a simple hill because of this. This mainly happens when travelling from one location to another as it’s like going through a tunnel filled with a skybox making you feel like being ‘outside’.

Whilst exploring, you will come across checkpoints where you can stealth your way through or simply blow everything up. If you decide to nuke the area, the moment that area is out of your sight and, for some reason, you need to arrive back to it, you will witness a miracle in the making…the entire checkpoint is intact like nothing has ever happened. It’s like the Jackal, the supplier of arms has powers that you cannot imagine. I guess as a game standpoint, if this doesn’t happen, before you know it the game will become a morgue yet only filled with the sounds of never-to-be-seen monkeys. I feel it would be a better option if the checkpoint respawning rate is based on the day / night cycle in game time, like within 24 hours (or whatever the ‘reasonable’ case maybe).

According to an interview with Clint Hocking for Rock Paper Shotgun, Clint explained that to fully appreciate this game can take the player 50 plus hours to complete it. For me, arguably being the world’s slowest gamer, took me just shy of 100 hours to finish it; and that’s including locating every diamond, unlocking every safehouse, locating all the buddies…basically everything that you can possibly do in that game. However, it is a bit of a rinse, repeat type of gameplay for which is a shame (as explained before).

Far Cry 2 is certainly a move up from the previous game in terms of gameplay (e.g. buddy system, semi open world etc) however it still suffers the pitfalls of the previous instalment – that is it really needs to flesh out the world rather than looking pretty – that is give it a bit more backstory behind it. Well it actually did with the Jackal tapes however you have to locate them to appreciate it. Make the game more believable instead of relying on graphics to tell the story, for which graphics, in itself, is a good thing however not in isolation though. Overall, it’s a good game to play and explore however there’s still a lot more room for improvement.