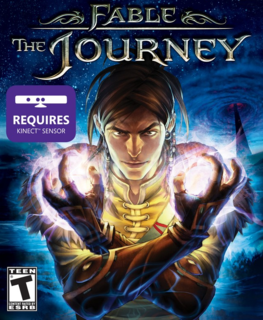 This game is easily the best from the saga, and one of the best games for Kinect and Xbox, an unforgettable adventure!

User Rating: 9.5 | Fable: The Journey X360
By ALPRAS91 | Review Date: April 25, 2013
Since its first show, in the E3 2011, this game got my attention, because of the different approach that Lionhead (the game publisher) took. Everything is different. But different is not always worse. In this case, is as good as the rest of the saga, but at the same time, we cannot compare this game with the others. In fact, the only thing in common is the gameworld and the story line. The differences? Well, for start, this is a Kinect game, it means you are the controller. Also, unlike the other games, this is a not an open-world RPG, but an "on-rail" first person game.


STORY (10/10): This game takes place after Fable 3, and follows the steps of Gabriel, a simple nomad, and his horse, Seren. After departing from their group, they found Theresa, a forseer ( that will be well know for those who played the previous games. In fact, Theresa is the only "bridge" between this game and the previous) in need that Gabriel helps after a a dark force starts to corrupt the world.
The story of this game is way darker the other Fables, and far more immersive. We will have feelings for the character's, and they will "play" with our emotions. The story will have many surprises and twists that will make you stick to your TV until the end of the game. Also, the voice work is sublime

SOUND (9.0/10): The soundtrack is awesome, with very impressive and epic tracks, with choir and orchestra, and memorable melodys. Everything that the Fable saga has accustomed us!
There could be more tracks, but the songs are so good that you'll not even notice this!

GAMEPLAY (8.0/10): Probably the least good part of the game, but still pretty good! There are two sections: The one where you drive Seren, the horse, and the "on rail" section. The driving section is pretty good, you just need to change the speed and directions. You need to avoid obstacles, rocky roads, and get experience points. In the on rail section, you just need to kill everything it moves, like Hobbes, Balverines, and other monsters. You have a lot of powers to unlock, and you have to use different powers with different enemies. The controls could be perfect, but there are sometimes imprecise, and it gets difficult the aim the enemies. Still, they are pretty good.

VEREDICT: A Must buy for kinect users and Fable fans, an unforgettable Journey!
Load Comments (0)