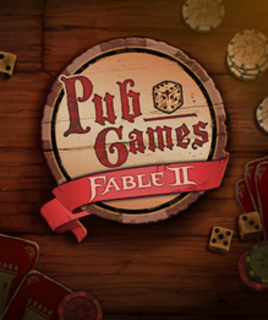 User Rating: 6 | Fable II Pub Games X360
By Shalomony | Review Date: August 13, 2008
Okay, Well Fable 2 Pub games is here, yes much earlier than the 3-weeks before Fable 2 release, but still finished none-the-less. The three games within are quite different giving you a chance to WIN big on some, but lose lots on others.
Out of the three the one game that has the nicest appeal at first glance is Fortune Tower, which has a simple "Hold or fold" play mechanic. Now you can get more winnings by betting more, but in the end it still comes down to chance.(or counting cards) YES you CAN count cards in this game as it has exact card amounts, the only hard part about counting cards in this gametype is switching between tables, which changes the amount of cards in the deck. Of course the bigger the deck, the LESS likely you will be to get a 'Hero' card which can be the MOST frustrating card to see when it does nothing to help you.

KEYSTONE has a nice craps/roulette/Yahtzee feel to it. The probability of your chances are clearly marked, which can help many beginners become more aware that "putting all your money on 3" has only a 0.5% chance to win you a ton. However it IS a solid roll system and payouts are according. The ARC tiles is a nice way to get a little extra even if you don't place properly that round. Of course you have your 1:1 payout tiles that you can use to try and break even, but news-flash if you bet on anything else that misses, YOU ARE LOSING. For people experienced in Statistic and probability, this game is fun.
[BLOODSTONE] Is essentially a reverse game where you bet on what the roll will NOT be, winning money for any bids that are not a match to the roll.(I'd highly suggest against betting on 1:1 slots, as you're MUCH more likely to lose some cash flow this way)

SPINNERBOX is a slot machine style game. It has small bets with occasional BIG payouts. There are a few different styles of boxes allowing you to win more by risking more. Of course it is a random probability of getting 'Pairs" as you could use a turbo controller to take care of the 'Tournament' portion of this game style. In short this game does not offer much, in the first tournament you CANNOT raise your bet, making it nearly impossible to win if one of your opponents happens to get a Triple match.
This game tye will likely drain most of your money, but if by some chance you get to win a tournament(which should be able to go faster than the normal play) you can gain some extra cash from this game,

IN SHORT, for a gambling and new casino style game, great. If you want to get money for Fable 2, play the tournaments until you actually win some money, THEN go back and play the games by yourself(that way you won't go into debt).

Graphics:8/10 (nice textures and bumpmapping. but an allaround 2d game)

Difficulty: 2/10 (A monkey could play this, and probably tested)

Value: 4/10 (good if you like casino style/HIGH Chance, but not worth it JUST for fable 2 items/gold. Get it if you got a pre-order code for sure)