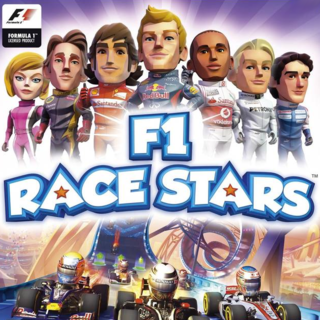 F1 Race Stars had the potential to be a great kart racer; sadly, some of the gameplay is hampering the experience.

User Rating: 6 | F1 Race Stars X360
By Domstercool | Review Date: March 16, 2013
A charming and bubbly racing game isn't something you'd expect from Codemasters, who normally go for pushing gorgeous graphics and realistic visuals for the motorsport games they publish. F1 Race Stars is a new style of racer for the company, a game that aims to bring more people to the brand of F1 that don't enjoy the realistic gameplay of F1 2012. It's a title that fits into the kart racing genre, bringing a mixture of inspiration from the Mario Kart series along with gameplay that implement ideas from the world of F1 racing. It's great on paper, but, sadly, it's not on par with the best of what Codemasters has produced in the past.

As soon as you turn on the game, you're privy to some fantastic visuals. This game has personality written all over it, with light-hearted bubble head character designs that are caricatures of real live F1 race drivers. This standard is passed into the animation, where during the start of the race, you will see these cute drivers play with their helmets, flash off amusing hand signals and high fives as the camera pans through the line-up at the beginning of each race. If there is one thing to be taken away from F1 Race Stars, it's that Codemasters hit the nail on the head when it comes to the visual design and presentation of the game.

Moving to the courses, the charming graphics ooze into the game's 11 tracks and their design. Each of them are based on a location from this year's F1 race calendar, which means you will be racing in such places as Japan, Singapore, Great Britain, Spain and the USA/ However, these tracks are outlandish and nothing like their real life counterparts. This is a kart racer after all, so you'll be driving on the roller coaster inspired tracks of Abu Dubai, driving through the British countryside, riding on top of trains, dodging two giant sumo wrestlers in Japan, and jumping into a shark's mouth off a ramp on the Australian circuit. All the courses use their location as inspiration, even throwing in some famous parts of real life circuits such as the famed first chicane at the start of Italy's Monza race track. Throw in loop-the-loops and other spectacular jumps and you have some great tracks; it's just that the gameplay in F1 Race Star isn't as good as the presentation, which is quite disappointing.

If you've played any kart racer from the past ten years, you'll know they often feature a way to turn around corners without the need of slowing down, normally a drift of some kind. There is nothing of that in F1 Race Stars, and it took me a few races to adjust to the approach that I need to play this game like a proper racing game using only brakes. I can tell you that it felt strange to be using such a realistic approach to a game that – in all intents and purposes – seems to be aimed at the younger audience of gamers. Once you adjust, it doesn't become as much of a problem, but, in a karting game, I can't help but want to go fast around these wonderful tracks. It certainly makes for a unique kart racer, if nothing else.

Traditional power-ups can be used to stop your opponent, such as Mario Kart inspired yellow bubbles (green shells), red bubbles (red shells), turbo boost (mushrooms), nitrous bottle (bullet bill) and blue bubbles (banana skins), but all of them are very uninspiring and plain. Bubbles are not memorable when it comes to thinking up weapons. Thankfully, rather than just leaving it at that, Codemasters have opted to bring in ideas from motorsport and use them as additional power-ups, which I have to admit are used in rather clever ways. The safety car power-up is one such item, which allows the person who used it to speed into first place while everyone else has their speed reduced and cannot go past the safety car. Rain, a determining factor in any F1 race, can also be used as a power-up. When activated, it equips your car with wet tyres, since the track becomes wet and creates problems for the cars by reducing their speed until the rain clears. There is also a single version of this power-up that sends a rain cloud to hover above a player's head, causing them to have to deal with a wet situation as everyone else drives past in the beautiful sunshine.

Keeping with the F1 theme, the KERS system from the sport is in use, but here it is executed as a boosting mechanic on the track, where you can charge a battery for an instant boost by letting go and then holding the acceleration button. Due to the different boost outcomes, the KERS mechanic makes it have more of an impact in the race.

But with every good idea in F1 Race Stars comes a multitude of less impressive ones. I hate the damage mechanic. When you get hit by a power-up, the car will take damage; the more hits you take, the more damage is dealt and the slower your car becomes. To fix this, you need to drive into the one of the two pit stops featured somewhere on the race track. It becomes a real pain in the arse when you happen to get hit after coming out of the pit stop and are far away from the next one, causing the handicap to be too much and often resulting in you moving to the back of the racing pack. It's a really harsh and unforgiving mechanic that spoils the game. It would be much better if it was done in the style of F-Zero, where the cars have life metre, and the pit stop replenishes it rather than every hit causing the car to become slower and making me frustrated that I cannot keep up with the other drivers.

Racing in the single player career has its ups and downs. With only 11 tracks, I feel that going through the 30 championships, which can sometimes feature five races, becomes too repetitive over time. The developers have tried to mix it up by putting in mirrored versions of the tracks, or some different settings for the power-ups or damage (such as a mode that causes damage when you hit a wall – I loathed that one!), but even that's not enough to keep it fresh.

Both the campaign and quick play sessions can be played with up to four people offline. It's better playing the game this way as the AI can be fairly brutal at times. Even when moving the difficulty from the game's 3,000CC (the hardest setting) to 1,000CC, it will still challenge you, and trying to get first in the later championships can become a real struggle unless you get your friends to play with you. I suppose that's true with many kart racers. But in Mario Kart, I can still have fun on the hardest setting. In F1 Race Stars, the annoying damage system makes competing with the 11 other aggressive AI opponents less fun and more frustrating. It's even worse if you're close to the top end of the spectrum and the leading player is well in front of the pack, as you don't get the right weapons to stop him. Once the AI is that far ahead and considering that some races take over 5 minutes, you might as well restart as you won't be overtaking it.

A neat feature is being able to take all four players online and play with other people, up to twelve in a race. Online is fairly solid, with the game running smoothly for most of the afternoon I played. There seems to be a good amount of players, so finding people should be easy for the time being. Apart from standard racing, you can also take part in other game modes like trophy collection (collect most trophies on the track to win) and refuel, a race that uses fuel pick ups as a speeding mechanic. The options for different game modes are varied, and it's nice to race with a full group of human players.

F1 Race Stars had the potential to be a great kart racer; sadly, some of the gameplay tilts towards the real life sport and hinders the experience. Along with the AI, it becomes something that no kart racer should ever be – a chore to play. F1 Race Stars has the looks, but can't deliver the exciting gameplay. I hope Codemasters sticks with the idea, because I'm sure they can improve on this reasonable attempt at a new kart racer. Right now though, I find it hard to recommend this over other available kart racers that happen to be released around the same time.
Load Comments (0)