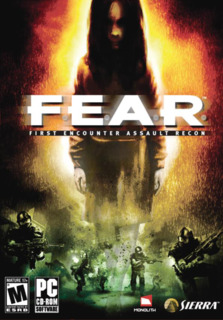 F.E.A.R stand for First Encounter Assault Recon is highly regarded as one of the greatest FPS of all time. its atmosphere is incredible dark and gritty environment and shooting by slow mo never get old. to this date no game has better combat than this game right here. I never really liked monolith previous game that was NOLF but when it comes to FEAR they nailed it. why? we will discuss more. shall we?

First lets talk about Story. Story in this game is fantastic and confusing at same time. you play as Point man, a member of FEAR team who possesses superhuman reflexes, and must uncover the secrets of a paranormal menace in the form of a little girl that is project origins and find and kill paxten fattel who lead an army of Replica Elite soldiers who are cloned super soldier.

The weakest thing is its design is just too linear and same office building. but still its incredibly amazing design game.

One of the best game ever made.