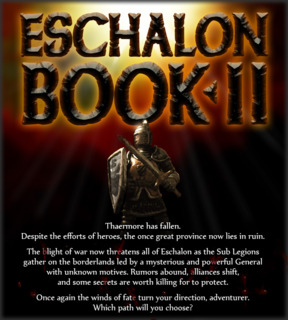 User Rating: 8.5 | Eschalon: Book II PC
By slayerSS-3 | Review Date: May 28, 2013
Well Eschalon book 2 is not the best rpg out there it have some flaws a lot of them but still it is a very enjoyable game.

The music is very good but for example there is not a lot of variety of it and sometimes you can hear it when it finish and start to looping again, doesnt bother me too much but it is there.

The story is the continuation of eschalon book 2, not very good really but it makes you keep going.
The side quest on the other hand are pretty bad except for a few that were clever (2 or 3 no more)

In terms of combat and gameplay, well it a very complex rpg system based on a lot of stats and this is were the game flaws are more evidents.
For example you have a traits for repairing thing or picking locks, but you can break any door in the game with you weapons but your weapons degrade on time and using them to break doors will make them gone in 3 hits soooo it seems that lock-picking and repairing is it important but the truth is it is not
Why? because you can choose from the beginning to disable that option just like eschalon book 1 was, the developer though that they were adding more realistic to the game but in the end it just add frustration, having you weapons breaking down constantly for fighting is lame and spending point on the repairing skill is a waste of good point that you need and must use on some other important skills like weapons, armor, cartograpy (to be able to draw and use maps) etc

So in the end the game is based on a system that is not functional or funny to use it is just frustrating.

The food and water, you have a bar for those two things and when they are in 0 you will start losing health until you die, it is a nice add-on because you can buy food from shops or from killing monster and gather water everywhere and it forces you to not abuse the rest feature or the quick travel system, this was properly implemented so it is a nice welcome.

Another big issue is that you dont have any consequences for your actions, you can kill everyone on a town or just a few and nothing changes, you kill a guard you kill half of the town it is the same nothing happens.

The graphics are good, I think it lacks from using the keyboard to use and move the character.

The combat is good, it is turn based and depending on your stats (dex, str, skills with your weapon etc) it make the calculation to see if you hit your enemy or not in terms of % so if you try to fight a high level enemy with a low level character you will hit him with 2% of hitting prob = sure death for you.
There is no respawing enemies except for some special parts like when you rest there is a prob % that some enemies spawn but it is not too high.

Overall a fun game that last 20 hours doing all the side quest so is not very long but still fun.
Load Comments (0)