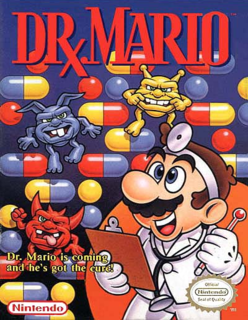 With its lack of graphical fine-tuning, the GameBoy version of Dr. Mario is simply not up to par with other versions.

This reviewer suspects that this game may have been a result of concerned parents voicing their opposition at the profession of Mario, who is a plumber and thus a blue-collar worker. Hence, to assuage - or lampoon - said persons' feedback, Nintendo had Mario working in a vaguely white-collar role. This reviewer is not certain if he is a doctor, a pharmacist, a drug-researcher or a scientist working on bottle-cleaning chemicals (more on this soon) in this game.

Like Tetris, Dr. Mario is a game involving puzzles which consist of polyominoes. The player has to construct shapes consisting of square cells in order to achieve a set solution requirement. In the case of this game, the cells comprise of the halves of medicine capsules and clusters of germs. The former are dropped into the playing field (which resembles a bottle, of all things), while the latter were already there.

(One would wonder why Dr. Mario is trying to clear bottles of germs with medicine when an alcohol rinse would have sufficed, but this reviewer supposes that the bottle could have been a replacement for the gullet of a patient, which would have been a bit controversial as will be explained shortly.)

Matching capsule halves with germs of the same colour (or shade, in the case of the GameBoy that was still limited to grayscale palettes) in a four-cell match will eliminate the whole string and give a score increment. That would have sounded simple, if not for said colour palette limitation that the GameBoy had; the NES version of the game had the advantage of 8-bit colour, so it did not have the issue of the lack of contrast like the GameBoy version did.

This very much made the game impossible to play without being in a perfectly lit area and batteries of adequate charge (or an adapter plugged into the GameBoy). There are thankfully only a few shades to worry about, but this reviewer cannot help but feel that not enough thought had gone into optimizing the colour and gameplay for the GameBoy version.

That leaves shape as the other factor left. Unfortunately, all capsules have the same shape, so the player will have to squint at every capsule to figure out their shade before dropping them . The germs are not as rigidly shaped, but there are only a few patterns to their outlines. Fortunately, their respective shapes are also related to their shades of colour, so picking them out for systematic elimination is not as troublesome as the capsules are.

Sadly, as the majority of stuff dropped are capsules, most game-over screens can be attributed to the lack of contrast for these things. (Said game-over events are brought about by anything spilling over the brim of the bottle, much like the polyominoes reaching in excess of the playing field in Tetris. As mentioned earlier, if the bottle had been, say, the stomach of a patient, it would have suggested a drug overdose of sorts, which would not have been inappropriate in a game intended for kids as much as for adults.)

It would have been more interesting if there had been some system for score bonuses to reward the use of a small number of medicine capsules to remove the germs, but the only incentive for doing so is to clear the level faster, and thus earn bonuses from having spare time. Unfortunately (pun not intended), such a bonus can also be obtained by the sheer luck of having the right capsules to drop in quick succession. Thus, being able to complete a level in time is just as much a matter of luck as it is skill (which is a gameplay design that this reviewer personally cannot accept).

There is a system for bonus points, which can be obtained by chaining together the elimination of consecutive strings. However, considering the randomness of the capsules dropped and the compositions of the germ populations, it is difficult to take advantage of this system - at least until most germs have been removed. This reviewer found that if the time constraint is not considered (the capsules will fall faster over time during a level), the system can be exploited once room has been cleared for the strategic orientation of capsules.

Like Tetris, the same gameplay is repeated over and over, only with progressively messier initial state of the playing field and faster dropping speeds of the capsule. It is a fun game, but the tedium of wiping out the same adversaries using the same technique is not a characteristic that many would accept in a game starring Mario, who is known more for traversing a variety of terrain and overcoming a myriad of hurdles - and certainly not killing microbes by lining up medicine with them.

Similarly like the gameplay, the audio does eventually get repetitive, especially the music, which is about exactly the same for all levels. Tetris may have gotten away with monotonous music and sound effects and heavily repeated animations and models, but only because it was the first game involving polyominoes to become popular. Unfortunately, Tetris's circumstances do not extend to this game, at least to this reviewer.

In conclusion, the GameBoy version of Dr. Mario could have been better had there been more refinements to make it more accommodating to the GameBoy's limitations.