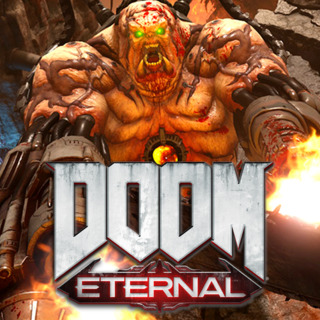 Doom: Eternal is definitely an improvement upon its predecessor. My main beef with Doom (2016) was its uniformity: it had, basically, two types of environment, and there was little to distinguish the enemies from each other, or from monsters from countless other games and movies. That has been largely rectified. The environments have become a lot more varied, some of them reminiscent of Warhammer 40000, others — though very, very faintly — of Giger, like the original games. None of them will make you go “wow”, but, at least, monotony will not be an issue. The enemy roster has been thoroughly reworked; the appearance of some enemies has been made to more closely match that of their counterparts from the original Doom games, and, most importantly, they have become a lot faster and trickier than in the 2016 game. They will teleport, dodge your fire, use a variety of attacks and generally force you to adapt your tactics to theirs. A system of weak points has been introduced: destroying a specific part of a monster's body will make it easier to deal with – and yes, the monsters now take visible damage. Your arsenal has been upgraded, as well: in addition to what you had in the last game, you now have a flamethrower, which makes enemies drop armor, freeze grenades and, in the later stages of the game, a superweapon that kills any demon in one hit (but charges for it are rare). The pistol is gone, but your chainsaw now regenerates one bar of fuel, so there is more focus on melee kills. Those have also been improved. Glory kills in Doom looked somehow unfinished: the animations felt crumpled, and your enemies did not feel solid; you could be tearing off the head of a demon three times your size, and it felt like he was made of cotton. Glory kills in this game utilize a bayonet and are a lot more detailed, varied and gory. Maybe not quite what I wanted, but they are definitely fun and no longer feel incomplete. The upgrade system has also been expanded and can feel a bit overwhelming at first, but you eventually come to appreciate the additional depth it lends to the gameplay. The latter adheres to the same formula as before — every level is, basically, a sequence of arenas you have to clear before proceeding — but, because of all the changes listed above, it has become a lot more challenging. The last game took me about 17 hours to complete on the hard difficulty. This one took 28, and that's without the bonus levels and challenges that you have to complete to get all the rewards; those would have added another five hours, at least. Mostly, the difficulty on Ultra-Violence was just right, but some battles in the earlier stages of the game felt like they had one enemy too many, and, in the final boss fight, I had to lower the difficulty because it would have taken forever otherwise (the boss itself was awesome, no complaints there). Hopefully, those balance issues will be addressed. It is also worth mentioning that platforming and acrobatics play a much larger role here, to the point where you sometimes feel like you are playing Crash Bandicoot, and not Doom; I was sometimes annoyed by that, but not too much. Crashes to desktop were also a problem, though, again, not a major one. The story was something of a disappointment; it's not that it was bad — it was actually quite interesting — but most of it was in the form of...notes. That's right, unless you read a ton of notes you find throughout the game, you will have no idea what is going on. I believe reading in action games is a terrible idea to being with, and it has unpleasantly surprised me that they have reverted to this mode of storytelling after the last game's event-driven plot. I guess it's a good thing the game is not plot-driven in the first place. On the whole, I feel that Doom: Eternal offers a lot more bang for your buck than its predecessor, and its few flaws are more than outweighed by all the new stuff it introduces and the thing we all want from a game like this — pure, unapologetic carnage.