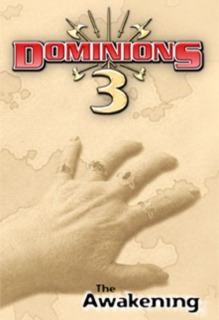 The King of Turn-Based Strategy!

User Rating: 9.5 | Dominions 3: The Awakening PC
By earwicker7 | Review Date: December 18, 2010
I really wasn't expecting to like this game, but I gave it a shot because of all of the rave reviews I was hearing. I was looking forward to Disciples 3, but heard nothing but horror stories about it, so I didn't bother. The last TBS I had played before that was HOMM5, which looked good, but had such bad AI that I didn't play it for very long (I didn't do multiplayer at that point).

I thought this was going to be my send-off to TBS, the game that finally sent me packing, realizing that the genre was out-of-date. But it has turned out to be extremely addictive; this is the first time I've experienced the hallowed "One More Turn!" syndrome, which I thought was just a myth.

I should warn people, though... this game has, by leaps and bounds, the largest learning curve I've ever experienced. I've been playing for months, and I feel like I've barely cracked the surface. There is just so much depth to this game, but I can see how it overwhelms people. My advice... finish the tutorial (this may take 30 hours!), then dive headfirst into multiplayer. You will get destroyed, but you will learn a lot.

The best way to describe the game is Dungeons and Dragons crossed with 3-dimensional chess. If you can get past the extremely primitive graphics, and the 294 page manual (I've read it three times and I still don't feel like I know much of anything), you'll be rewarded with games that last months (some of them have lasted over two years), battles that are straight out of Helm's Deep, and a tax on every brain cell you have.

Highly, highly recommended for those willing to invest the time necessary to learn the game.
Load Comments (0)