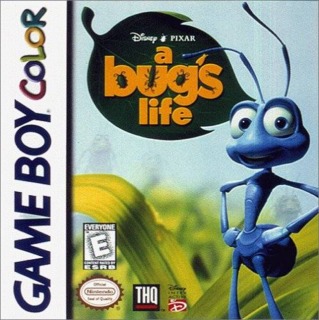 For some cute, quirky fun, this game is worth it.

User Rating: 7 | Disney/Pixar A Bug's Life PS
By Jon_To_The_C | Review Date: July 25, 2009
Despite the many bad reviews this game received, I was one of the only ones who seemed to not mind this game.

A Bugs Life is a very interesting play. You play Flick, the ant, in his quest to save his colony. In the game, you'll meet an all manner of characters from the movie who will both help and hinder you in your journey.

The basic gameplay of A Bugs Life is, in most cases, to get from Point A to Point B. Flick must face different kinds of enemies and natural obstacles to reach his destination. However, much more can be achieved by leaving the main trail and discovering additional secrets and surprises. I'll go more into this later.

For the levels that are not linear, there's a variety of different goals in the levels. For instance, in one level, Flick must travel the area to find each of his friends. In another, you must help the brave ant acquire each of the pieces to make his famous mechanical bird.

What does Flick use for self-defense against the big bad bugs of the world? Two things. Berries and his butt. One of the main ways of squishing enemies is to perform a butt-slam on it, which is done by simply double-tapping the X-button. (Humourous, I know.)

The other way is to use the various throwing weapons that are berries. In each level, Flick will begin with red berries in his possession. These are the weakest variety, so it's best to find a quick upgrade. In every level, every upgrade is hidden once. The other berry colours are blue, green, purple, and gold, which are respectfully in the order of strength. Each berry will need a lesser number of times to hit an enemy to vanquish it. However, only the Gold Berry will kill an enemy permanently. Any other means of destroying a foe will lead to its respawning later on. While it can be maddening to have one kind of berry and then accidentally downgrade (changes can't be reversed in each level) all it means is that you need to plan and act carefully to correctly proceed with the strongest berries you can find.

A very fun feature to the game is the use of seeds. Planting a seed will cause some sort of plant to grow. Now, the default plant that grows out of each seed is a mushroom, which you can use to bounce on to reach high places, but by collecting special items, you can change the result of your seed, changing it into a leaf-ladder, a cannon, and many more kinds of tools. Doing this is often necessary to continue on. Just the concept of this is entertaining enough, and using the different kinds of plants to your advantage contributes to the whole adventure.

There are various achievements you can gain in each level, as I mentioned above, which are not possible if you simply speed through. These achievement are three special coins. To get all three in each level you must complete three goals. The first is to vanquish every enemy using the Golden Berry. The second is to find all 50 grains wheat. The third is to achieve all the letters of Flick's name which are hidden throughout each level, along with the grain.

Now, this may sound tedious, but in actuality, the thrill of solving the puzzles and finding everything is enough to keep one going. If you have the ethic and patience, challenge yourself to get the three coins in every level.

Every area in the game has three levels. The third in every one is a boss, which you'll always recognize as a antagonist from the movie. (Thumper, the bird, etc.) The rules of collecting achievements are still the same in these levels.

Throughout the completion of the game, you'll also get to view many movie clips from the blockbuster, which can also keep you entertained.

Overall, if you're looking for a quirky and entertaining movie-based game, this isn't a bad choice. Overall, it's not a very hard game, but if you're a relaxed player, I say GO FOR IT!
Load Comments (0)